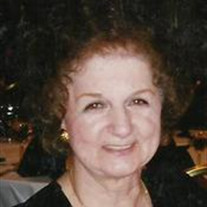 "She Never Met A Stranger" Sylvia Pangos Park passed away July 25, 2013 surrounded by her loving family in Salt Lake City, Utah. Jennifer was unable to come, but she called and talked to Mom daily. She was born to Gust Pol and Helen Kastanis Pangos March 12, 1927 in Copperfield, UT and from the beginning, she never met a stranger. Within minutes she had a new friend. Sylvia had a great love of music. She would play her harmonica while Aunt Bev played the accordion and sang. She was always shopping for deals and for the perfect treasure. Dad would tell her "Sylvia, you're going to go broke saving money". She loved spending time with her family playing cards or dice, and everyone singing while her husband Vern drove us all over the valley on Sundays. She attended Granite High School, though she left in her junior year to support her mom and Aunt Mary. During WWII she worked at the Ogden arsenal and the Murray Phone Company. When actress Shirley Temple would call her husband, actor John Agar, who was stationed at Camp Kearns, every operator on the line plugged in and listened. When the phone company was torn down, Dad got a plug and turned it into a key chain for Mom. Mom and her sisters attended a night school class for typing. Even as adults they got in trouble with the teacher and had a blast. She had a love of roses; she loved working in the yard and caring for her flowers. She also adored hummingbirds and always had a feeder for them. She worked at Grand Central and Warshaws for many years. Then at Brunswig Drug. The last job was a joy; she babysat Blakely Nielson from the time she was a toddler until well into elementary school. Sylvia was preceded in death by her husband Vernon, her sisters Vickie Loukas, Goldie Tibbs, Cleo Gosdis, and Mary Crebs, and her brothers Angelo and George, as well as her parents. She married Vernon L. Park September 6, 1946. They had three daughters: Linda Joanne Brown, Sharlene Denise Knowlton, and Sylvia Marlene Richards. She had six grandchildren: Michelle Firestone, Jennifer Duarte, Mike Newman, Christina Albertson, Alexander Richards, and Amanda Richards. She had five great grandchildren, and two great great grandchildren. She lived her life as a devout member of the Greek Orthodox Church with a love of God she passed on to her children. Family and friends are invited to attend a viewing on Monday, July 29, 2013 from 6-8 pm with a prayer service from 7:30-8:00 pm at Prophet Elias Greek Orthodox Church, 5335 So. Highland Drive, Holladay, UT 84117. Funeral will be Tuesday, July 30, 2013 at Prophet Elias at 11:00 am. Interment at Sandy City Cemetery, 9000 So. 700 E. Sandy, UT.

"She Never Met A Stranger" Sylvia Pangos Park passed away July 25, 2013 surrounded by her loving family in Salt Lake City, Utah. Jennifer was unable to come, but she called and talked to Mom daily. She was born to Gust Pol and Helen... View Obituary & Service Information

The family of Sylvia Pangos Park created this Life Tributes page to make it easy to share your memories.