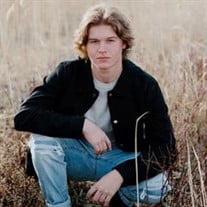 The family of Taegan James Brown created this Life Tributes page to make it easy to share your memories.

Where are you headed son? “To hang out”.