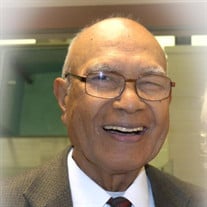 Talive Lilii Siufanua 1930 - 2020 Talive Lilii Siufanua passed away on July 23, 2020 at the age of 90 surrounded by his loved ones. He was born on February 10, 1930 to Liae and Liva Siufanua in Faleniu, American Samoa. As the eldest son he shouldered many responsibilities especially since his father often worked away from home on other islands. He migrated to Hawaii in his mid-teens and joined the Marines when other young men his age were still attending high school. His military service lasted 20 years and took him through one tour of Korea, two tours of Vietnam as well as assignments in Camp Pendleton CA, Kaneohe MCAS, Perris Island SC and Norfolk VA. After retirement he “tested the waters” in Las Vegas NV, Kanab UT and American Samoa before settling in Laie Hawaii which he considers his true home. Talive started a 2nd career in Hawaii working for the Civil Service at Pearl Harbor Navy Base. He was part of the motor pool and drove large trucks and buses. He achieved 25 years and a full retirement from the civil service position in addition to his earlier military service. On June 30th 1961, Talive married Elaine Young of Kanab, Utah in the Los Angeles temple. They were blessed with three daughters; Darlene (Fealofani) Afemata, Pauline (Te’e) Masaniai & Halona (Taylor) Wily. He also has a beloved daughter Rose (Bill) Laolagi who he was grateful to meet and connect with during the latter part of his life. He is survived by His wife, 4 daughters, 13 grandchildren and 4 siblings (Estella Reid, Nifo Lilii, Lana Burgess, and Arvey Siufanua). He was an accomplished musician who learned how to play the clarinet at a young age and often played in orchestra dance bands both in Samoa and Hawaii. In the Marine Corp he studied music theory rigorously and taught himself to play the tenor saxophone in order to secure a position in the USMC Marching Band. He travelled with the band often and was able to march in the Tournament of Roses Parade, in addition to the Cotton Bowl and Sugar Bowl. He was often commended on how he could make the Saxophone sing. He also loved to work on his yard and loved to accomplish DIY projects to improve his home. Talive put his family first in all things. He was an excellent provider. After retirement he focused on his grandchildren. He drove them to school and often parked outside the fence watching over them during their recess breaks. He had advice for his grandchildren and often talked to them about their future. Wisdom that will be forever cherished. Talive is a member of the Church of Jesus Christ of Latter-day Saints. He worked hard to obtain his testimony and valued the teachings of a living prophet. It is his sincere belief and desire that his family will be reunited and live together throughout the eternities.

Talive Lilii Siufanua 1930 - 2020 Talive Lilii Siufanua passed away on July 23, 2020 at the age of 90 surrounded by his loved ones. He was born on February 10, 1930 to Liae and Liva <Pilimai> Siufanua in Faleniu, American Samoa. As the eldest... View Obituary & Service Information

The family of Talive Lilii Siufanua created this Life Tributes page to make it easy to share your memories.