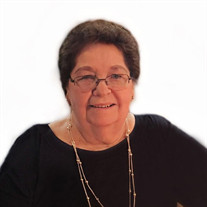 Tamara L Henderson (1940-2018) Tamara Lee Underwood Henderson was reunited with her husband Richard and other extended family, on July 30th 2018. She was born in Mammoth, Utah on January 21, 1940, the 6th of 8 children of Kenneth and Virginia Underwood. She grew up in Eureka, Utah and attended Tintic Schools. She married Richard W. Henderson, on October 27, 1956. They moved to Provo where they raised their family of four children, Kim (Greg) Carter, Highland; Gregory Henderson, Provo; Pamela (David) Pappas, Payson; and Teresa (Mike) Eastman, Rio Rancho, NM. Tamara was born in a small home that her family occupied while her father was a miner. She and her cousin, Shirleen, were inseparable often being seen around town together and thus were given the nick-names of “Peanut Butter and Jam”. She married our dad Richard Henderson after he returned from the Korean Conflict. They married and moved to Provo where mom began raising her children. Life was simple on West Center Street in Provo and although money was tight, mom always made sure her kids had full stomachs often stretching one pound of hamburger into many delightful meals for six mouths. Often times she would sacrifice her appetite so her children could eat. Mom was a fantastic seamstress. We never had to worry about buying pants that were too long because we knew mom could make the better than new. The Henderson kids were the best tailor-fitted kids on the block. Eventually mom went to work, honing her talents, at Taylor’s Department Store in Provo. She worked there until the closing of this business. She became our go-to babysitter when our children needed a watchful eye. Portions of her personality traits can be detected in each of our children. In this she was very successful because her grandchildren were the highlight of her life. Mom is survived by her children, 8 grandchildren and 17 great-grandchildren her siblings, Fawn Fife, Carol Ainge, and Adren Underwood and sisters-in-law, Virginia Underwood, Vicki Underwood, Kathy Underwood, Betty Hunsaker and Sherlin Grill. Mom was preceded in death by Dad; her parents; grandson Christopher Michael Eastman, sister Peggy Underwood; brothers Vance Underwood, Jimmy Underwood, John Underwood; brothers-in-law, Paul Ainge, Robert “Bob” Fife, Mack Henderson, and Jerry Henderson, all from Eureka! Because of the extensive care she required, we would like to thank all of the nursing staff at Utah Valley Regional Medical Center for their compassion, professionalism and complete understanding of a very difficult situation. Mom you will be missed. We are glad you are with dad again and walk with no pain. Love you forever and back! Funeral services will be performed by Premier Funeral Services. Friends and family are invited for the viewing on August 3, 2018 at the Eureka LDS chapel on Main Street in Eureka, UT from 9:30-10:45. A memorial service will be held at 11:00 followed by graveside service at the Eureka Cemetery.

Tamara L Henderson (1940-2018) Tamara Lee Underwood Henderson was reunited with her husband Richard and other extended family, on July 30th 2018. She was born in Mammoth, Utah on January 21, 1940, the 6th of 8 children of Kenneth and Virginia... View Obituary & Service Information

The family of Tamara L. Henderson created this Life Tributes page to make it easy to share your memories.