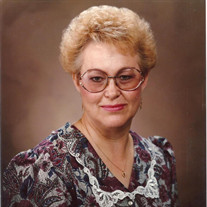 Tamera Helane Davis Lott, loving mother and wife passed away peacefully on Tuesday December 23, 2020 in Salt Lake City, Utah. Helane was born November 16th 1943 in Elmo Utah to William & Maude Davis. She grew up on a farm north of Elmo near Washboard Flats in central Utah. During her time there she shared in the family’s livelihood of farming, herding and milking cattle and other various chores to help support the family. This continued until she met the one man that would take her away from the farm to begin a new life. That new life began on September 2nd 1961 when she married Don R. Lott. Helane and Don soon moved to the Kearns area of the Salt Lake Valley and purchased a home where they raised their 3 children. Family was very important to Helane and she loved spending time with her family and most of all her grandchildren. Helane was a dedicated homemaker, an accomplished seamstress, an avid shopper with good taste, and most of all she enjoyed working in her flower gardens where she cherished her many colorful lilies as well as her numerous well-manicured rosebushes. Years later while raising her family she returned to school to get her GED. Something she was proud to accomplish. Helane worked at O C Tanners for 25 years after which she devoted her time at home as a caregiver to her beloved husband. Don and Helane were life-long companions for 51 years until his passing. A year after his passing Don and Helane were sealed in the Jordan River Temple. Helane is survived by her children William T. (Denise) Lott, Wayne (Vickie) Lott, Gwen (Dale) Goettsche. 13 grandchildren: Megan (Chris), Shana (Zach), Shawn, Melissa (Hunter), Erica, Kory, MaLiesa (Heather), Patricia (Jason), Gene, Cheryl, Jennie (Craig), Brandi (Mykle), and Jamie. 20 great grandchildren: Brayden, Gavin, Zariah, Grayson, Jackson, Olivia, Shiloh, Jeremy, Aspen, Joseph, Alexandra, CharLee, JJ, Eliza, Bracken, Colvin, Decker, Sloan, Jackson and Elizabeth. 3 great great-grandchildren: Cassius, Atticus, and Haven. Brothers Shey Davis and Reed Davis, and Sister JaNeen Hales. Helane was preceded in death by her husband Don, son-in-law Dale Goettsche, parents William & Maude Davis, Brothers Farrell Davis and Rodney Davis, and Sisters Ilene Gilbert and Edna Young. She will forever be loved by her family and friends for her lifelong love, dedication and support that she gave to each of them. A viewing will be held January 8th at 11:00am-12:00 noon. LDS Ward House 3976 West Dimrall Drive (5615 S) in Taylorsville. Interment to follow at the Utah Veterans Cemetery and Memorial Park.

The family of Tamera Helane Davis Lott created this Life Tributes page to make it easy to share your memories.