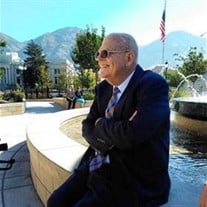 Obituary for Ted Lee Gibbons Our beloved father, grandfather, friend, and husband, Ted Lee Gibbons, 73, passed away on Friday, April 12, 2019, after a 10-year battle with cancer. He was a man of unwavering faith who constantly nourished others with the good word of God and with his knowledge, testimony, and love of the Savior. Dad dedicated his life to sharing the Gospel. He was an exceptional teacher who was able to bring the scriptures to life for his students, applying it to their lives and their situations. He loved being a seminary teacher and often commented that he loved it so much, he would do it for free. He influenced and changed the lives of thousands over the years with his ability to teach truth and with his profound knowledge of the scriptures. When his kids were growing up, he would offer them 5 cents if they could read any verse in the Book of Mormon to him and he could not tell them what book and chapter it was in. He was a disciple of Christ in all he said and did. Dad married the love of his life, Lydia Agnes Kimball, in the Logan temple on May 10, 1968. She said that when they were dating, Dad was like the sun compared to all the stars she had dated in her life. He was almost too good to be true. One day they were sitting on some swings and she said she wanted 12 children. He said he did, too! They got them! Dad loved Joseph Smith. He studied his life extensively and performed a presentation called “I Witnessed the Carthage Massacre” in which Dad told the events of Joseph Smith and his martyrdom through the eyes of Willard Richards. It stands as a powerful witness of the truth that Joseph Smith was indeed a prophet of God. Dad performed this hundreds of times, several times in Carthage Jail. The spirit was always strong as he bore witness of the prophet. Through this presentation, Dad helped countless others to feel for themselves that Joseph Smith was a prophet of God. We envision that Dad will now be able to greet and embrace Willard Richards and the prophet Joseph Smith. What a moment that will be for him! Dad was born to wonderful parents, H. and Lola Gibbons on March 12, 1946. Both have preceded Dad in death, with his father passing away when Dad was only 17 years old. We can only imagine the reunion he must have had with them. Dad served a mission for The Church of Jesus Christ of Latter-day Saints to Brazil in 1965 and served for two years in the army before becoming a full-time seminary teacher. He loved to write and he authored over 10 books, again always encouraging others to come to Christ through his ability to teach with words. He wrote song lyrics, poems, and humorous pieces, as well as a number of articles for LDS Living and Meridian Magazine. He was also on the committee that wrote the Gospel Doctrine lessons for the Church. Dad was an avid journal keeper. He has over 172 journals chronicling his life, his experiences, and his testimony. For the past many years, each year he would give a bound copy of some of the highlights from his journal writings to his kids. He called these books “Snapshots.” He often quoted his sister Eileen who said if you did not keep a record of your life it would crumble to the dust behind you. After he was diagnosed with cancer, Dad’s dream of serving another full-time mission with Mom was not realized, but he was able to serve local missions as a photographer for the Church and also as a missionary with Mom at the UVU institute, where he finally got to teach the gospel for free! Dad and Mom also were able to be tour guides for several years to Palmyra, Nauvoo, and other locations in the world. Dad served as a bishop twice, and in the MTC branch presidency, callings he loved. Dad was a minister and loved ministering to others. His latest calling was as Stake Patriarch, in which Dad’s closeness to the Savior increased even more as he was able to speak in His name to give revelation and council to those seeking a blessing. Ted is survived by his precious bride, Lydia, and his 12 children: Chris (Tara); Debbie (Earl) Nicholas; Mike (Carolina); Tami (Jerald) Taylor; Josh (Kim); Adam; Danny (Rachel); Stephen (Noel); Robert (Jocelyn); Johana (Matthew) Schliesser; Tiffany (Matt) Gaunt; Bexi (John) Anderson, and 46 grandchildren. He is also survived by his sisters, Nanette (Joe) Nelson and Barbara (Dan) Workman, and his brother, Larry (Ladawn). We have no doubt that Dad is now again doing what he loved so much, declaring the truth of the Gospel and of our Savior Jesus Christ, whom he loved with all his heart. We love you dad. Until we meet again. Funeral services will be held Thursday, April 18, at 11:00 a.m. at the Orem Utah Geneva Heights Stake Center (546 N. 500 W., Orem, UT.) Viewing will be held Wednesday, April 17, from 6:00-8:00 p.m. at the Stake Center (546 N. 500 W., Orem, UT) and Thursday at the Stake Center prior to services from 9:30-10:30 a.m. Interment at the City of Orem Cemetery, 1520 N. 800 E, Orem, UT. Condolences can be sent to www.premierfuneral.com.

Obituary for Ted Lee Gibbons Our beloved father, grandfather, friend, and husband, Ted Lee Gibbons, 73, passed away on Friday, April 12, 2019, after a 10-year battle with cancer. He was a man of unwavering faith who constantly nourished others... View Obituary & Service Information

The family of Ted Lee Gibbons created this Life Tributes page to make it easy to share your memories.