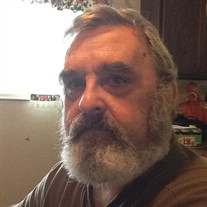 Ted Ellis McDaniel In Loving Memory Born June 30, 1943 in Alameda, California to Frank and Betty Jean Adin McDaniel. Passed peaceful on April 15, 2018, after a courageous battle with cancer. Married Nea Jean Tanner on October 20, 1972 in the Salt Lake Temple. Together they had 4 amazing sons. Ted Spent his early years in Colorado, before moving with his mother to Sacramento. California, returning to Durango, Colorado to spend each summer with his beloved Grandparents. After graduating from Sacramento High, he joined the US Marine Corp. A service he was well pleased with. He had many great stories of his time in the service of his country. Upon discharge from the Corp, he worked in a rental yard for about 6 years before moving to Utah and joining The Church of Jesus Christ Of Latter-day Saints. He attended Salt Lake Technical College, in commercial art. While there he met his sweetheart Nea Jean. During his married life he worked several jobs which included security guard on Temple Square in Salt Lake City, maintenance mechanic in production plants and working in rental yards. His hobbies were art, building cars and cooking. He built a 1923 T-Bucket roadster from the ground up, for which he received a best engineered at the Peach Days car show. And best of class at the Salt Palace car show. Survived by his sons Ryan (Brianna), Scott (Heather), and Kelly (Stephanie); 11 grandchildren. Preceded in death by his son Greg, brother Marlin, sister Joy, and his parents. Funeral services will be held at 10:30, Saturday, April 21, 2018 at the Clearfield North Stake Center, 151 North 1000 West, Clearfield, Utah with a viewing to begin at 9:00am. Interment to follow at the Clearfield City Cemetery, 1050 State Street, Clearfield, Utah.

The family of Ted Ellis McDaniel created this Life Tributes page to make it easy to share your memories.