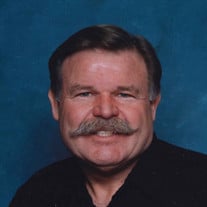 Tenney Otto Poulson Jr. Obituary Tenney Otto Poulson Jr. was born on November 1, 1946 in San Diego California to Wilma Irene Vogt and Tenney Otto Poulson Sr. He has always been known by his nickname T.O. As a child he enjoyed playing baseball with little league. In high school, he played football and wrestled at Crawford High School. He was baptized as a teenager into the Church of Jesus Christ of Latter-day Saints. He served a mission in Buenos Aries, Argentina in 1965. T.O. attended Grossmont College in San Diego, California and Brigham Young University in Provo, Utah. He met his sweetheart Georganna Grow at the institute of Religion in San Diego. They married on August 16, 1968 and were sealed in the Los Angeles Temple in 1969. Together they had 9 children raising 7. T.O. was a hard worker, having several occupations in his lifetime. He was a College Campus Police Officer, pool builder, master plumber while his family lived in California. After relocating to Utah, he was a Code Enforcement officer for Layton, Utah. Dad was list maker and always on time or early to everything. He enjoyed sporting a big bushy mustache. He was a gun enthusiast and enjoyed taking his family shooting. In his later years he enjoyed growing out his big white beard and playing Santa Claus for Christmas Parties. He loved to write his autobiography stories from his life history. He was a storyteller who could embellish those stories, often making the story bigger and Better. He loved the mountains and felt at home in them. T.O. has a testimony and a love for his Savior Jesus Christ. He loves the prophet Joseph Smith and we are sure he is excited to mingle in his presence in Heaven. T.O. leaves behind his wife Gigi of 50 years, His children: Heather (Steven) Shaffer, Heidi (Jeremy) Newson, Aaron (Sandy) Poulson, Matthew (Katie) Poulson, Laura (Simon) Robertson, Christine (Jeremy) Burgener, Carrie (Levi) Andersen and Karen Wiley; 21 grandchildren, and 2 great grandchildren. Preceded in death by his parents and children: Shawn and Georgianna Poulson. Till we meet again! Private Graveside service will be held May 2, 2020 at Evergreen Memorial Cemetery in Ogden Utah. The Family wishes to express their gratitude for the loving care given to T.O. at Quail Meadow Assisted Living, Heritage Park Nursing Facility and from the AFI Hospice team. We appreciate you all more than we can express!

The family of Tenney Otto Poulson Jr created this Life Tributes page to make it easy to share your memories.