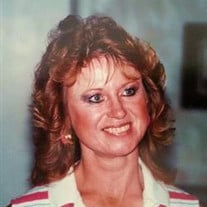 Teresa Jane Dowhaniuk Darling Smith, 59, of Springville, Utah passed away peacefully on March 14, 2014 following a battle with cervical cancer. She was born on October 13, 1954 to Anton and Holla (Holly) Jane Taylor Dowhaniuk in Provo, Utah. Teresa spent her childhood life growing up in Springville, Utah and graduated from Springville High School. Two years later on June 27, 1975, she had a daughter, Tricia Ann Dowhaniuk. Tricia later passed away at the age of 18 months from a liver disease. Soon after that, Teresa was married on October 15, 1976 to the love of her life, Richard (Dick) Darling. They had two sons, Jeremy and Travis and lived in Orem, Utah for approximately 11 years until Dick passed away from a heart attack on June 8, 1987. Teresa and the two boys moved to Hideaway Valley, Utah for approximately 20 years. After that, she moved back to Springville, Utah to help care for her mother, Holla Jane. Due to declining health, Teresa spent the last five years of her life at Parkway Health Center in Payson, Utah and Canterbury Assisted Living in Springville, Utah. Teresa was a member of The Church of Jesus Christ of Latter Day Saints. She was a homemaker most of her life. Her hobbies include but not limited to: Fishing, Camping, Hunting, Cooking, Sewing, Making Crafts, Playing Games, and Family Reunions. She dearly loved all children (especially babies) and animals throughout her life. She was a hard worker and always worried of others all the way to the end of her life. Teresa was preceded in death by her daughter Tricia Ann Dowhaniuk, her husband Richard (Dick) Darling, her father Anton Dowhaniuk, and her mother Holla (Holly) Jane Dowhaniuk. She is survived by her sons Jeremy and Travis, her siblings; Linda Marchant, Larry Dowhaniuk, Sherry Lucas, Brenda Miner, Darla Dowhaniuk, and Christee Moon, two granddaughters; Taylor Grace and Macie Rose. We would like to give a special thanks to all of the people that cared for Teresa, especially her “second family” at Canterbury Assisted Living; Jason, Emilie, Justin, Jennifer, Amber, Jenny, Brittnie, and Cassie. Also, her friends at Canterbury; Marie, Dona, Leatha, Jay, Maxine, and Hope. A memorial service will be held on Friday March 21, 2014 at 11:00 A.M. at the L.D.S. Heritage Church located at 1785 East 400 South, Springville, Utah. Burial followed at the Evergreen Cemetery in Springville, Utah. Following the burial service, there will be a luncheon back at the Heritage Church.In Lieu of flowers the family suggests that donations be made to any Central Bank in Teresa Darling Smith/Jeremy Darling name.

The family of Teresa Jane Dowhaniuk Darling Smith created this Life Tributes page to make it easy to share your memories.