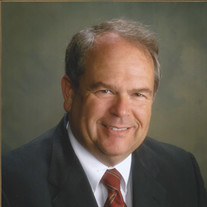 Dr. Terrell Alden Thomson, M.D., Ph.D., FACP passed from this earth on 6 July 2019. He was born 14 October 1949 in Salt Lake City, Utah to J. Alden and Jean Peterson Thomson. He spent his childhood and teen years in the Cottonwood area of Salt Lake City. He served a mission for the Church of Jesus Christ of Latter-Day Saints in Ireland. Terry graduated from Olympus High School in Salt Lake, received his B.S. and M.S. from Brigham Young University, his Ph.D. from Virginia Commonwealth University and his M.D. from the Medical College of Virginia. He did an Internal Medicine residency at Maricopa County Hospital in Phoenix, Arizona and was awarded the “Distinguished Resident of the Year.” In 1986, he moved with his family to American Fork, UT and went into practice with Dr. Dale Greenwood. He practiced Internal Medicine for 29 years, retiring in 2015. Terry met his wife, Debra Jane Leslie, at BYU and they married on October 11, 1975 in the Los Angeles LDS Temple. They are blessed with five sons, James (Camilla) of Idaho Falls, Idaho; Preston (Melissa) of Laguna Beach, CA; Jeff (Kelsy) of Gilbert, AZ; Matthew (Keira) of Eagle Mountain, UT; and Nathan (Mayra) of American Fork, UT. Terry is the proud grandfather of 14 grandchildren, Jay, Leslie, Ashley, Carter, Sawyer, Beckett, Ledger, Mason, Ryker, Blake, Tate, Libby, Jace, Finley with a new grandchild to come in January. Terry is an active member of the Church of Jesus Christ of Latter-Day Saints. He loves the gospel and especially loved studying the Book of Mormon and Book of Mormon geography. He served in many callings in the church including bishop and stake high councilman, but his favorite callings were as scout master and gospel doctrine teacher. He was a scout master 4 different times taking his scouts twice on a 50 miler through the Uinta Mountains, a place he loved. He loved the youth and loved the scouting program. He is an Eagle Scout. He loved studying the scriptures and delighted in teaching the lessons in gospel doctrine each Sunday. Terry loves the mountains around Northern Utah. During his high school years, he climbed every peak in the Salt Lake Valley. After High School graduation, he and his friend, Dave Rabiger, climbed the Grand Teton. Inexperienced and a little over confident in their abilities, they said they would have died if a climbing club hadn’t come along and helped them across the glacier. Neither of them knew how to use an ice axe and they were wearing construction hard hats as their climbing helmets. Nevertheless, they made it to the summit and were always proud of that accomplishment. Terry loved education and actively engaged in lifelong learning. The library was a once a week trip for him. He preferred a book to anything digital. He ended each day by reading a book and watching old movies. His favorite music was Marty Robbins and the Irish Tenors. Terry was never sad that he went to school for so many years. He enjoyed the challenges of medicine and loved his patients. He was in practiced Internal Medicine and later, he joined the Tri-City Medical group in American Fork. He was a hospitalist at American Fork Hospital where he was honored on their Wall of Honor. Terry loves his family. He was diligent in teaching them as they grew. He loved to take them fishing. He loved baseball and football. He coached his older boys and made himself available as a team doctor to the high school for all his boys so he could be on the side lines of the games. He was diligent in teaching them about cars. Terry loved cars. During his lifetime he bought and sold over 52 cars. Most were cars he bought and restored. He worked with each son to restore a car to drive when they turned 16. He loved to build and taught his sons about electricity, plumbing, carpentry and irrigation systems. A favorite expression of his was, “if they dig enough ditches, they will go to college!” He was right! When the boys ask to have a swimming pool, he went and bought 5 shovels. He told them as soon as the hole was dug, he would have it installed. Terry did not enjoy traveling very much, but humored his wife and went on many vacation trips including Hawaii, Europe, the Caribbean and Mexico. He loved to fish in Alaska. He took his boys on fishing adventures to parts of the Alaska wilds. Terry is a caring, loving husband, father, grandfather and son. He was preceded in death by his father, mother, and sister. He spent the last two years fighting Alzheimer’s disease. In spite of the disease, he fought it with dignity and acceptance. He was cared for by his wife, Debbie, and the loving staff of the Highland Glen Memory Care. He will be missed by his family. His sense of humor will live on in all of us as we remember his one liners and subtle humor. Funeral Services will be at 11:00 a.m. on Thursday, July 11, 2019 at the American Fork East Stake Center located at 825 East 500 North, American Fork, Utah. Viewing will be prior to the services from 9:30 a.m. to 10:45 a.m. and burial will be at 2:00 p.m. on Friday, July 12, 2019 at the Washington City Cemetery in Washington, Utah.

Dr. Terrell Alden Thomson, M.D., Ph.D., FACP passed from this earth on 6 July 2019. He was born 14 October 1949 in Salt Lake City, Utah to J. Alden and Jean Peterson Thomson. He spent his childhood and teen years in the Cottonwood area of... View Obituary & Service Information

The family of Dr Terrell Alden Thomson M.D. created this Life Tributes page to make it easy to share your memories.