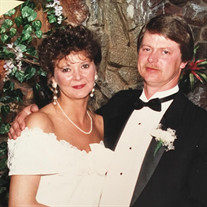 Terry L. Chase 62 passed away on Feb 5th 2019 to return to heaven with her family who preceded her in life on earth. She married Jeffrey Henderson in her early life and together they had a son Dustin Joseph Henderson. She later married Steve Chase and together raised Dustin and were a family forever. Terry was a very strong woman, but fragile who cared for and loved her husband, son, grandchildren, mother, father, brother's, aunt's', uncles, grandparents, nephew's, nieces, cousins, in-law's, and all her friends. Terry was always worried about family and friends that she had not seen or heard from for sometime and it was hard for her to even think of them seeing her with the health issues she was having and did not want them to worry about her. She struggled for many years before her death, and was very hard to go on, but did for her husband, and son. Terry is survived by her husband, Steve T. Chase, her son Dustin j. Henderson, grandchildren, Justice Delyn (Alex) trujillo, Christian, James (Punky), Tanner. Chandler, Dillon, Conner, Reagan, and Harper Henderson. Terry had 1 greatgrandchild that she was able to cherish and see before her death, you could see it and hear about the love she has for that precious little girl. Terry's wishes were for cremation and insisted upon this request, and did not want a viewing or funeral, which is very hard for a family to do. She was such a beautiful woman and would like to be remembered as that. Her heart was even more beautiful, and those who truly knew her, know it is true. Terry and I are so thankful to all for the kindness we have received from so many. To you Judy Crockett, thank you so much for coming and being with Terry, it meant so much to her and I could see the happiness of your visit before her passing. You are and will be her best friend forever. From Husband: You mean so much to me, we have been through so much together, rough, tough, but more happiness than anything, together we made it through it all. I love you so much and wish you were here to grow older together. Our letters to each other are true, and you are my soul mate. Love you forever, your Husband. There will be a Celebration of Terry's life come this spring when it warms, as she loved Spring, and it will be a great one as she deserves.

Terry L. Chase 62 passed away on Feb 5th 2019 to return to heaven with her family who preceded her in life on earth. She married Jeffrey Henderson in her early life and together they had a son Dustin Joseph Henderson. She later married Steve... View Obituary & Service Information

The family of Terry Lynn Chase created this Life Tributes page to make it easy to share your memories.