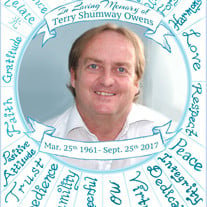 Terry Shumway Owens returned to his heavenly home on September 25, 2017. He was born on March 25, 1961 in Benson, Arizona to Grant Owens and Elaine Barney. He graduated high school as co-valedictorian and got a presidential scholarship to Brigham Young University. He served a mission in Okayama, Japan for the Church of Jesus Christ of Latter Day Saints. The Japanese language, music, and people became a lifelong love. He continued studying kanji, symbolism of all kinds and hosted annual Japanese exchange students. After a sweet courtship, he married Leesa Marie Allen on April 20th, 1984 in the Saint George, Utah temple. In 1986, he graduated from BYU in Computer Science and worked at WordPerfect for years after. He dedicated his life to his family and continually sought truth and balance. Terry took a Human Freedoms class that fueled his passion for finding answers, creative solutions and inspired a lifetime of study, resulting in his mission statements: Focus light and energy with love and have fun! As free as can be within the bonds of security, fulfilling responsibility and treating people caringly. May we resolve conflicts without there being hurt feelings, but when we do hurt each other’s feelings, may we forgive each other! Terry intentionally lived what he believed. He was devoted to everything he did, never missed a day of school or work and always made time to help his children feel special with fun birthday parties, creative projects, and deep discussions. His highly empathetic and sensitive nature allowed him to laugh and cry freely. He loved children and carried little toys in his pockets to give them. Nursery was his favorite way to serve. Terry Owens is survived by his wonderful loving wife of 33 years Leesa, his parents Grant and Elaine, his siblings Sheri, JoAnn, Rebecca, and Jeffrey, and his five children, whose names are a testament of his love of meaningful symbols: Melody Spring, Lovetta Marie, Trezor Sheen, Skyler Sunray, and Telisa Sharalot. And his three grandsons who were the joy of his life: Rion, Eli, and Moses. Terry Owens was preceded in death by his grandsons Maximo and Lazarus Reyes-Cairo, and his brother Alan Owens. Funeral services will be held 11:00 am, Monday, October 2, 2017 at the LDS Chapel located at 1505 N 130 E Orem, UT with a viewing at the church Sunday from 6:00 to 8:00 pm and Monday prior to services from 9:00 to 10:45 am. Interment will be at Timpanogos Memorial Gardens 1000 N 400 E, Orem, UT 84097.

Terry Shumway Owens returned to his heavenly home on September 25, 2017. He was born on March 25, 1961 in Benson, Arizona to Grant Owens and Elaine Barney. He graduated high school as co-valedictorian and got a presidential scholarship to Brigham... View Obituary & Service Information

The family of Terry Shumway Owens created this Life Tributes page to make it easy to share your memories.

Terry Shumway Owens returned to his heavenly home on September...