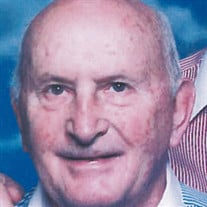 Therlo Cooper 1931 – 2016 Our beloved husband, father, brother, uncle and friend was welcomed into the arms of our Heavenly Father on May 10, 2016 with his wife by his side. Therlo was born April 12, 1931 to Heber William Cooper and Marguerite Helene Sandoz. He was born and raised in Syracuse, Utah along with 14 siblings. He graduated from Davis High School in 1950 and shortly after, was drafted into the U.S. Marine Corp. After 2 years of active duty he joined the Air Force reserves for the remainder of the 36 years of his military career. He was also employed with Hill Air Force Base as a sheet metal aircraft repairman for 33 years. Therlo married Nadine Salisbury on April 12, 1958. Their marriage was solemnized in the Salt Lake City Temple on May 13, 1964. He was a member of the Church of Jesus Christ of Latter-Day Saints. He enjoyed camping, fishing, playing dominoes and pinochle, and spending time with his family. He always had a joke for any occasion and was a friend to everyone. Therlo is survived by his wife of 58 years and their son Leon, one sister Orleen (Dick) Cann, one brother Dean (Mary), numerous nieces and nephews, and two beloved dogs, Patches and Cassie. He was preceded in death by his parents, 5 brothers and 7 sisters. Funeral services will be held at 12:00 Noon, Monday, May 16, 2016 in the LDS chapel at 2431 North 250 West, Sunset Utah with a viewing from 10:00 to 11:45. Interment will follow at Memorial Lakeview Cemetery in Bountiful at 1640 E Lakeview Dr Bountiful Utah. You were the beat of my heart, my childhood friend. You became my life long companion and love of my life. Until we meet again, I will miss you. Love Nadine

Therlo Cooper 1931 &#8211; 2016 Our beloved husband, father, brother, uncle and friend was welcomed into the arms of our Heavenly Father on May 10, 2016 with his wife by his side. Therlo was born April 12, 1931 to Heber William Cooper and Marguerite... View Obituary & Service Information

The family of Therlo Cooper created this Life Tributes page to make it easy to share your memories.