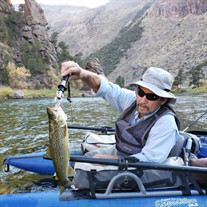 “Hi I’m Tom” Tom was born in Salt Lake City on June 3, 1958. He attended Bingham High School in Copperton before graduating from Crescent City High School in California where he learned Mechanics. He returned to Salt Lake City and worked as an auto body technician for the rest of his career. He started a family that began with three daughters, then expanded to include a son, another daughter, and step-children. He loved all of them dearly, he was a great father. Later he found the love of his life, spending the last thirteen and a half years of his life with her by his side. In 2017 he was diagnosed with a rare brain tumor which was relentless. Tom persistently fought an uphill battle with the chordoma and then West Nile virus. Although he gave it his all, he lost the battle on September 13, 2021. Tom’s greatest passions were outdoor adventures. He loved to hunt, fish, golf, and take long road trips exploring everything along the way. Tom loved and accepted everyone unconditionally. This loss is profound and he will be sorely missed. Tom is survived by his sweetheart Jennifer, his father, siblings, children, grandchildren, extended family, and many friends. On Friday, September 17, 2021, there will be an open house viewing at Premier Funeral Services located at 67 East 8000 South, Midvale, UT 84047 from 6:00 to 8:00 pm, where family and friends can come and pay their last respects.

The family of Thomas LaVerne Abreu created this Life Tributes page to make it easy to share your memories.