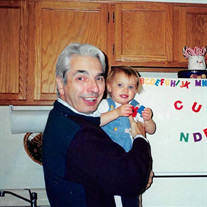 "Our loving father, Thomas "Tom” Edward Behnke, passed away at Canyon Creek Senior Living in Cottonwood Heights, Utah on April 28, 2019. He was born April 9, 1941, to Leo and Alvina “Lou” Behnke in Chicago, Illinois. He is preceded in death by his mother, Alvina “Lou” Behnke, his father, Leo Behnke and his brother, James “Jim” Behnke. He is survived by his daughter, Amy Behnke Muller (Jameson) and his son, Andrew Behnke (Marianne Monson), former wife, Margaret Green, and 10 grandchildren, Kendra Muller-Taylor (Christopher), Alyssa Muller, Ava Muller, Joia Muller, Cedar Behnke, Cole Behnke, Caelum Behnke, Calla Behnke, Caird Behnke, and Maia Behnke. He is also survived by his neighbors Michelle and Michael Contreras and their children. Tom loved his family and wanted them to know that he would love them forever. He always found the good in situations. Two of his favorite sayings were, “Have fun!” and “You gotta love where you’re at!” He showed generosity in all he did. He did whatever he could to put a smile on your face. He was the dad that showed up to support his children in their many activities, no matter what. He was the grandpa that sent huge boxes of toys for Christmas to make sure the kids knew he cared about them. He loved the Lord and was faithful in teaching his children to pray, go to church, and serve others. He was the guy that stopped to help when a stranger had trouble with their car and the one who saved the turtle that was in the middle of the road. He was the adopted grandpa to his neighbors and helped out whenever he saw something out of order or someone needing help without being asked. He also loved talking with people, Chicago, sports especially football, Texas, hardware (he was a vendor at Loews), ice cream (he owned a Baskin Robbins), serving with the Knights of Columbus, and he could always be counted on to be an usher at 10:30 am Mass at Saint Marks Catholic Church in Plano, Texas. He was the handyman who could figure anything out. He taught us to swim, to work, to play, to serve, and to “Enjoy where you are.” He taught us that strangers were friends waiting to happen, to say “please, thank you, I love you, and please forgive me,” to expect the good in others and to give hugs. Our father had struggles with dyslexia, divorce, his children joining another faith, and dementia. He experienced hard things in his life but overcame them all focused on how he could bless those around him. He was diagnosed with Alzheimer’s in 2010 and stayed fiercely independent in his home until the end of 2018 with the help of his neighbors, Michelle and Michael Contreras. He moved to Utah to be near his daughter in Dec. 2019. Shortly after he came to Utah, we found that he had a thoracic aortic aneurysm. He refused surgery, saying he was ready to go. He knew he had Alzheimer’s, he called it “Young-timers”, and he got his wish which was to never forget his family. He knew us to the end. We will miss you for the rest of our lives and our lives will forever be better for having you as our Dad. All are invited. Funeral will be held Monday, May 6th at 11 am at St.Thomas Moore 3015 Creek Rd, Cottonwood Heights, UT 84093. Graveside services will be right afterward at South Jordan City Cemetary, 10630 S 1055 W, South Jordan, UT 84095."

The family of Thomas Edward Behnke created this Life Tributes page to make it easy to share your memories.