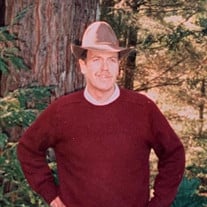 Thomas “Thom” Melton Forsyth II 1950 - 2021 Thomas (Thom) Melton Forsyth II passed away peacefully on December 5, 2021 in Provo, Utah after a decades-long health battle. Born on November 3, 1950 to Cannie Theodore Forsyth and Sadie Belle O’Neal in Jacksonville, Florida, Thom was the baby of the family with four older brothers and one adoring older sister. He spent his childhood in Jacksonville and moved to Salt Lake City, Utah in his teens, graduating from West High School in 1968. From 1970 to 1972, Thom served as a full-time missionary for The Church of Jesus Christ of Latter-day Saints in the England Southwest Mission. Thom married Cyndi Brown in the Oakland California Temple of the Church of Jesus Christ in 1977 and graduated from Brigham Young University, Provo in 1983. He lived in Jacksonville, Florida, Salt Lake City, Utah, Dallas, Texas, Arcata, California, and Provo, Utah. During his life, Thom worked for the IRS in different capacities (including as a Special Agent) and for both the U.S. Postal Service and U.S. Census Bureau. Thom is survived by Cyndi (Brown) Forsyth (Cleveland, Georgia), their three children, Thomas (Angela) of Phoenix, Arizona, Erin Guerrero (Gabe) of Payson Utah, Lindsay Barber (Mark) of Cleveland Georgia, 13 grandchildren (Jackson, Sadie, Lucy, and Ella Forsyth; Gabriel, Jacob, Ruby, Elsie, and Ivy Guerrero; June, Eden, Grace, and Everett Barber), as well as his sister, Betty Jane Pack (Blair) of Hattiesburg, Mississippi, and numerous nieces and nephews across the country. Thom enjoyed the simple things in life: a milkshake, getting a cold soda pop, going for a drive, and sharing a good meal with family. Even at the very end of his life he talked of making it back to the South to have a catfish dinner with his sister, Betty Jane. He was a faithful member of The Church of Jesus Christ of Latter-day Saints and had a deep love of His Savior, Jesus Christ. He had a sense of humor and enjoyed visiting with people and cutting up. He loved watching his grandchildren play together and giving them rides on the back of his wheelchair. A memorial service will be held at the Jones Cemetery in Callahan, Florida at 10:00 a.m. (EST) on Monday, December 27, 2021. The service will be broadcast via Zoom at https://us04web.zoom.us/j/2368045752?pwd=T3JTQ3hIcS9ZTVFOOVNJMmJGaVJmdz09 (Meeting ID: 236 804 5752; Passcode: 8h8Usj).

The family of Thomas Melton Forsyth II created this Life Tributes page to make it easy to share your memories.