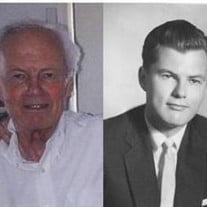 Our dearest Husband, Father, Grandfather, Brother, and friend Thomas Mitchell Lythgoe, age 81, passed away at his home on February 5, 2015. Tom was born November 7, 1933 in Salt Lake to Leo and Lavinia Lythgoe. Tom graduated from Granite High School and attended the UofU and BYU where he met his future wife Gwen Robbins. They were married in the Salt Lake Temple on June 7, 1963 and were blessed with 3 children and 3 grandchildren. Tom was a devoted member of the Church of Jesus Christ of Latter-day Saints. He served a mission to England. He held various church callings including bishopric counselor, high councilman, and Gospel Doctrine teacher. He served as a guide on Temple Square, a mission with Gwen to the Utah State prison, and was an ordinance worker at the Jordan River Temple for seven years. Tom was employed as an editor for the LDS church, provided voice recordings for BYU, and the Utah State Blind Assoc. He sang many solos and had a talent for drawing portraits and cartoons. He had a gift of imitating voices. He and his brother, Dennis, did many programs to the delight of many audiences. Tom was the narrator for the Nephi Handcart Pageant for several years which he enjoyed very much. Tom was a kind and friendly person to everyone and was loved by all. Tom is survived by his wife, Gwen; son, Bret; daughters, Laurie(Dan) Nisonger, Michelle(Dave) Severtsgaard; grandchildren, Lindsey Nisonger, Paul Nisonger, Nicole Severtsgaard. Brother, Dennis(Marti) Lythgoe; sisters, Mary Bradford and Gaye(Kelly) Smith. Sister in law, Lou Jean Williamson. The family would like to thank Inspiration Hospice for their kindness. A viewing will be held Friday, February 13, 2015 from 6-8pm at the Whitehall Ward 3150 W. Whitehall Dr(3985 S) WVC, Ut. Funeral services will be held at 11 am on Saturday, February 14, 2015 at the Whitehall Ward chapel with a viewing prior from 9:45-10:45. Interment at the Valley View Cemetery.

The family of Thomas Mitchell Lythgoe created this Life Tributes page to make it easy to share your memories.