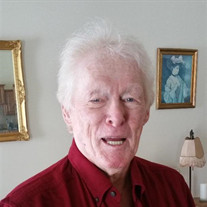 Thomas Gene Smith, 76, returned to his Heavenly home due to health complications on February 13, 2020. Tom was born November 5, 1943 in Tooele, Utah to Harvey Gene Smith and Marjorie Ruth (Sutton) Smith. He grew up in the Grantsville/Tooele area, attended Tooele High School, and then served in the United States Navy in his early adult years. There he learned the skills of an electrician which later helped him in a civil position at Hill Air Force Base, Utah. Tom earned a Business Management degree from Stevens Henager College as well. Tom loved to travel. His later work as a truck driver offered him the opportunity to see the Northwest. Tom married Jolene Hammond Smith on August 20, 1965 in the Salt Lake Temple. They divorced in 1986. Tom later married Rita Hedglen Smith on January 3, 2004. She passed away on November 1, 2016. Soon after, Tom met his “Sweet Sheila”. Tom and Sheila (Goodsell) Toone Smith married on October 16, 2017. Sheila was his constant companion and caregiver. Tom greatly enjoyed flowers in the yard, hunting, and had a flare for Victorian style decor. However, he loved fishing, his horses, and western movies! He also loved the Lord and developed a strong appreciation for the atonement through our Savior Jesus Christ as he found his way back to the Church of Jesus Christ of Latter-day Saints. Tom and Sheila had a special bond through temple service and genealogy. Tom is survived by his wife; Sheila Smith, his five children; Cary Allen Smith, Amy Lyn (Smith) O’Dell, Stacy Jo (Smith) Berryman Rees, Rachel Anne (Smith) Mulleneaux, and Matthew Thomas (Cindy) Smith. He also leaves a direct posterity of thirteen grandchildren and six great grandchildren but has been blessed with many more with extended family connections. Tom is also survived by his siblings; Mitch (Suzi) Smith, Sherie (Conrad) Lee, and Susan Smith. A Celebration of Life will take place on Saturday, March 7, 2020 at his home ward located at 770 East 2100 North, North Ogden, Utah from 11:30-1:00 pm. Please come help us celebrate his life with memories and stories. After which, a graveside service for cremation burial will take place at 3:00 pm in the Grantsville Cemetery located at 370 West Main Street Grantsville, Utah.

Thomas Gene Smith, 76, returned to his Heavenly home due to health complications on February 13, 2020. Tom was born November 5, 1943 in Tooele, Utah to Harvey Gene Smith and Marjorie Ruth (Sutton) Smith. He grew up in the Grantsville/Tooele... View Obituary & Service Information

The family of Thomas Gene Smith created this Life Tributes page to make it easy to share your memories.

Thomas Gene Smith, 76, returned to his Heavenly home due to health...