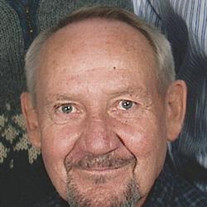 “Tom” Van Wagoner, 76, passed away on October 11, 2014 after a long illness. He was born on August 12, 1938 in Salt Lake City. Tom was a loving brother, father, and grandfather whose unique personality and sense of humor will be missed. Tom was a retired U.S. Postal Service employee who also served in the U.S. Navy after finishing high school. He enjoyed the outdoors, liked playing golf, and was an avid fisherman for much of his life. He loved to look at the mountains around the Salt Lake valley and was always captivated by a beautiful sunset – he never let the sun go down while inside, always staying outside until the last of the daylight was gone. Tom was perhaps best known among his family and friends as a guitar player and singer of country/western songs. He spent many hours entertaining people with his western ballads and graceful baritone voice. Tom also had a great sense of humor and truly enjoyed making people laugh, often with a few off-color sayings and jokes. He loved his family and enjoyed spending time with his children and grandchildren. Tom is survived by his daughter, Jennifer Van Wagoner, and his son, Thomas M. Van Wagoner, and two grandchildren; by two sisters, Kay Van Leeuwen and Renee Oakley; and by his ex-wife Sheila Van Wagoner, with whom he remained good friends and who visited him regularly throughout his illness. He is preceded in death by his parents, Boyd and Viola Van Wagoner, by his brothers Boyd and Clyve Van Wagoner, and by his sister Luana Rasmussen. Interment & honor guard Saturday, October 18th at Utah Veterans Cemetery, 17111 South Camp Williams Road, Bluffdale, 11:30 am. Family and friends are invited to a Celebration of Life on Sunday, October 19th at The Woods Reception Center on Ninth, 6775 S. 900 E., Midvale, from 3:30-5:30 pm.

The family of Thomas A Van Wagoner created this Life Tributes page to make it easy to share your memories.