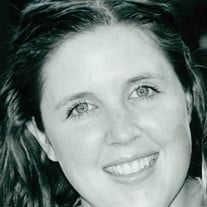 Tiffany “TT” Nicole Horne Lewis is finally free as a bird. On April 19, 2018 she lost her 16-month battle with cancer, probably the only thing in life she ever disliked, except for green peas. TT was born February 21, 1976 in Phoenix, AZ, the fourth of eight children to Roger Horne and Carol Johnson Horne. Tiffany treasured the 14 years of childhood spent in Great Falls, Virginia. Although the family moved during Tiffany’s high school years to Sandy, Utah in 1992, she remained a proud Virginian. After graduation from Brighton High School, Tiffany attended Westminster College in Salt Lake City, Utah, majoring in Business Management and Spanish. While fiercely independent and confident in her young adult years, Tiffany purchased what would become the first of five old fixer-upper homes. She married Don Carlos Lewis of Sandy, Utah in the LDS Manti Temple Nov 8, 1997. They settled in Tiffany’s second fixer-upper home on 9th East, SLC where she and Don enjoyed their two dogs, 3-legged “Clark” and too-fat “Gretchen”. In their third fixer-upper home on 3rd South, Don and Tiffany welcomed their first and second children into the family - Isabela Rose Lewis (2004) and Charles Seth Lewis (2006). The family often stole away on family road trips to the Pacific Northwest and Logan, Utah for local cheese and honey. Zion National Park had a special place in Tiffany’s heart. Tiffany became more enamored by all things vintage and shabby chic. The decorating style for which she is well-known and admired began to emerge. In 2006, complicated by Crohn’s Disease, Tiffany experienced symptoms of Transverse Myelitis, a neurological disorder that affects the spinal cord. She spent 2 months in the hospital rehabilitating but remained partially paralyzed on one side of her body. This slowed her down, but certainly did not knock her down. Never a complaint was murmured. She exuded sunshine and happiness, fortitude and sass. A fourth fixer-upper on 11th East was purchased and became home to their flourishing garden and a cozy place to welcome their third child – Henry Jay Lewis (2011). By now, Tiffany was a bona-fide city girl with a small army of best friends who together raised their children, shopped for antiques, lunched at The Dodo, pieced quilts, cooked international fare. The hand of Providence led Tiffany and Don to give up city life for an (old) country home in Centerville, Utah replete with 30 chickens who Tiffany referred to as her “Girls”. Tiffany further enlarged her circle of best friends who supplied each other with love, encouragement, and endless amounts of flowers, fresh eggs, and tchotchkes tied up with pretty ribbons, occasionally with a bottle of Coke thrown in for good measure. Tiffany was passionate about flowers, interior decorating, antiques, milk glass, quilts, her chickens, Yerba Mate, chocolate mint pie, key lime pie, banana cream pie, sunshine, fresh air, snowfall, rainfall, clean white linens, TJMaxx, shoes, handbags, lip gloss, pedicures, photography. But more than anything else, she loved people, especially her ‘Daddy-O’, ‘Princess’, ‘Handsome’, and ‘Hens’. She loved giving. She loved sharing. She loved visiting. She loved consoling. She loved conversing. She was one to make others laugh by keeping it real and telling it like it is…with loud, honest, sassy style. She showed us that beauty exists in all things – especially in things old, broken and discarded; that complaining is useless; that gifts should be given while there is time; that life can be cheerful at all times – even when struggling against impossible physical hardship. Tiffany is preceded in death by her older brother James “Bucky” Horne. She is survived by her parents Roger and Carol Horne (Sandy, Utah); and 6 siblings: Katie (Wade) Peabody; Gina (Victor) Sipos; Kimberly (Braden) Taylor; Jennifer (James) Breese; Christopher, and David. Tiffany leaves behind her husband, Don, and their three children, Bela, Charlie and Henry. Also surviving Tiffany is sister-in-law Candace Horne and 16 nieces and nephews who hands down would profess TT to be their favorite aunt. Also left behind are aunts, uncles and scores of cousins who love, adore, and honor Tiffany’s light in this world. We are better people because of her. Friends may visit with family at an evening viewing Friday, April 27, 2018, 6-8pm at the Centerville Stake Center, 950 N Main St, Centerville, Utah (right next door to TT’s house). Another viewing will be held Saturday, April 28, 2018 9:30-10:45am at the same location, followed by a funeral service 11-12pm. Dedication of the grave and interment, Salt Lake City Cemetery. In lieu of flowers Tiff strongly requested donations be made to an account on youcaring.com. Her husband Don Lewis will distribute the funds to another family fighting cancer. Search under the names Don Lewis or Katie Peabody.

The family of Tiffany Nicole Horne Lewis created this Life Tributes page to make it easy to share your memories.

Tiffany “TT” Nicole Horne Lewis is finally free as a bird. On...