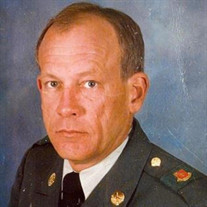 Timothy Leigh Berhow passed away peacefully on April 26th, 2022, surrounded by family. Tim was born in Ames, Iowa on July 5th,1949 to Walter Edward Berhow and Dorothy Johnson Berhow. His father was a proud member of the United States Army, and Tim spent his childhood moving to various places around the country. The cherished values of American democracy were instilled in Tim at a young age, and consequently, like his father, he devoted much of his life to serving in various public service roles. He, too, enlisted in the United States Army, and served as 1st Sergeant. He honorably served two tours in Vietnam as a member of the 101st Airborne, and was the recipient of a Purple Heart. Upon his return, he continued his service as a member of the Utah National Guard and worked to recruit others to serve in the Armed Forces. Tim cared deeply for his community. Even after retiring from the military, he worked for over two decades in public law enforcement both as an officer in the Orem City Police Department, and as an investigative detective for Sandy City Police Department. In discussion and review of Tim’s life, his family has continually commented on the legacies for which he will be most remembered. Certainly his patriotism, but also his love for the outdoors. Tim spent decades exploring the colorful canyons and wild country of southeastern Utah, and there was a special place in his heart for the San Rafael Swell. He knew the area better than anyone, having spent thousands of hours navigating the vast wilderness on ATVs and dirt bikes with his friends and family. Tim was his best and happiest self living outside in the Buckhorn. His children are committed to honoring a strong legacy of profound outdoorsmanship. Truly the greatest of Tim’s legacies is that of his posterity. He is the father of six kind, accomplished, and loyal children: three with his first wife, Karen Stiffler, and three with his second wife, Marci Berhow. He also held deep love for his wife, Nancy’s, three children, who affectionately referred to him as “Papa Tim.” His children were able to spend his final days with him, sharing memories while laughing and crying about all the times they spent with their dad. The greatest hits include memories of camping, blasting loud rock ‘n roll, and watching Star Wars—especially when he read the episode preambles in a loud, exuberant voice (Tim’s boisterous voice will forever be remembered). Tim leaves behind his wife, Nancy Berhow, whom he married in 2010. For twelve years, she dutifully and lovingly sat by his side, until his very last breaths. He is survived by his sister, Paige Berhow, as well as his children: Alicia Berhow, Leigh (Joanne) Berhow, Derek Berhow, Natalie (Josh) Hill, Taylor (Erik) Berhow, and Clinton (Angelia) Berhow. He is also survived by Nancy’s children: Tina (Scott) Michael, Angilee (Daniel) Dakic, and Cortland Wright. Tim’s family legacy also includes 19 grandchildren and one great-grandchild on the way: Brody, Brayden, Owen, August, Olivia, Nina, Lilly, Tate, Ander, Violet, Luca, Deacon, Nexus, Ledger, Riggs, Jack, Emery, Leighton, and Banks. Per Tim’s request, a private graveside service will be held in the military cemetery at Camp Williams on May 4th, 2022. A fitting end to a life defined by exemplary patriotism. Rest In Peace, Tim, and may the force be with you.

Timothy Leigh Berhow passed away peacefully on April 26th, 2022, surrounded by family. Tim was born in Ames, Iowa on July 5th,1949 to Walter Edward Berhow and Dorothy Johnson Berhow. His father was a proud member of the United States Army, and... View Obituary & Service Information

The family of Timothy Leigh Berhow created this Life Tributes page to make it easy to share your memories.