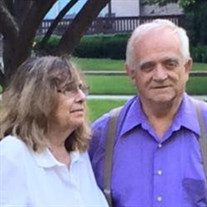 Timothy Joe Collins November 4, 1945-December 9, 2020 Tim introduced himself as a martian from Le Mars, Iowa who came from a small family of eleven siblings. He loved his career as an educator. Early in his career, he was a teacher at Eisenhower Jr. High in Taylorsville, Utah. He was then on his way to California but a substitute teacher named Karen Hixon distracted him from that path. They were married on December 20, 1975 in Salt Lake City. Two and a half years later they had their only child, Nicole. Tim absolutely adored her and showed her off when they visited friends and family in his birthplace of Iowa. Shortly after, he became a counselor with the Granite School District. He earned a Masters Degree plus 60 and many awards and praise. He had a passion for helping students on their own career paths for a bright future. After he retired from Granite School District while working at Hunter High School, he continued helping students at Salt Lake Community College. He loved to drive, wander and spoil his family. His favorite hobby was watching movies, especially westerns. He accompanied his family to the Sundance Film Festival for 29 years where he was well known for being his daughter’s wingman. For many years he battled diabetes and finally Parkinson’s disease which shortened his life. He died peacefully on December 9, 2020 at the age of 75 with his daughter by his side. The family wishes to thank Harmony Home Health & Hospice and Legacy House of Taylorsville for their care. We love you, Tim. Tim is survived by his wife: Karen Collins; daughter: Nicole Simons (Shaun); grandchildren: Kira and Kylee; five sisters: Mary Gay McClatchey, Sue Berreth (Clifford), Kathy Feller (Robert), Jill Collins, and Priscilla Strathman (Curt); three brothers: Cary Collins (Carolyn), Ted Collins (Malinda), and Jack Collins; and many nieces and nephews. Tim was preceded in death by his parents Wayne and Faye Collins; sisters; Nancy Rolfes and Kay Pfannkuch. A viewing will be held on December 16th from 10am-11am at Premier Funeral Services on 67 East 8000 South, Midvale, Utah. A graveside service will follow at 11:30am at the Salt Lake City Cemetary on 200 ‘N’ Street, Salt Lake City, Utah.

Timothy Joe Collins November 4, 1945-December 9, 2020 Tim introduced himself as a martian from Le Mars, Iowa who came from a small family of eleven siblings. He loved his career as an educator. Early in his career, he was a teacher at Eisenhower... View Obituary & Service Information

The family of Timothy Joe Collins created this Life Tributes page to make it easy to share your memories.