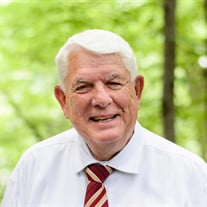 Timothy Ray Mitchell, entered this world on August 4, 1943 in Freeport, Illinois. When he was about 10 years old, the family moved near Chicago, Illinois. While there, Tim helped his father build their first house. Mostly a good “gopher”, but he learned to work with and for his family and passed this trait to his children. Tim attended college in Illinois and earned his bachelor’s degree in math. It was a good choice as it helped him enter the world of computers. He spent 25 years with IBM working with computers and managing the IT department. Tim worked for American Stores in Salt Lake City, Utah, where he met his wife of 25 years, Linda Louise Mitchell and were sealed in the Bountiful Temple on June 6, 1996. Together they have seven children, Tad (France) Mitchell; David (Michiko) Mitchell; Andrew (Kari) Mitchell; Daniel (Melissa) Mitchell; Karen (James) Duffy; Terra (Scott) Richardson; and Derek (Amanda) Gasaway. Tim is preceded in death by his father and mother, Wilbur Ray and Darlene Mary Mitchell, and sister Shari Feliksiak and leaves behind 23 grandchildren and 17 great-grandchildren. Grandpa Tim liked to play games with the grandkids. He taught a couple of the older ones to play chess and they were getting so good; they would sometimes beat Grandpa. The younger ones he played cars with, or dinosaurs with, and even on occasion played with dolls with the girls. However, Tim was never happier than when he was in his garden. Winter was the longest time for him. As soon as the stores had seeds of any kind, he would start gathering them for the vegetables he would plant…carrots, beets, lettuce, radishes, etc. Then a little later it would be vegetable plants he wanted…tomatoes, cucumbers, peppers, etc. And, oh, after the planting, he would patiently (and sometimes not so patiently) wait for things to grow. Every day he would walk the lawns and garden to see if something had come up. There was an abundance of garden-fresh vegetables, and berries. Family, friends and neighbors enjoyed the fruits of his garden. Tim was a bishop, on the High Council several times in various states, Gospel Doctrine teacher, and just recently, teacher for the young men; but the position he enjoyed most and really thrived at was as President of the Chancellor Gardens Branch. He loved the residents. He knew their names and what they needed. Tim missed them and his ability to help during Covid and couldn’t wait to get back to work. Tim was a helper and enjoyed helping others. He helped with whatever and whenever he was needed. …from putting in new lawns to sprinkler systems to building fences to remodeling basements to adding electrical stuff. If you asked, he was there. Tim and Linda enjoyed traveling. They spent time in Scotland, Ireland, and several spots around the States. The latest was their trip to Boston last year. Timothy/Dad/Grandpa/Great grandpa, you will be missed greatly and forever loved. Funeral Service: Saturday, April 2nd Chelemes Ward Chapel 1245 S. 1175 E., Clearfield, Ut Viewing: 11 am Service: 12 pm Interment: 1 pm Kaysville City Cemetery 500 E. Crestwood Rd., Kaysville, UT

Timothy Ray Mitchell, entered this world on August 4, 1943 in Freeport, Illinois. When he was about 10 years old, the family moved near Chicago, Illinois. While there, Tim helped his father build their first house. Mostly a good &#8220;gopher&#8221;,... View Obituary & Service Information

The family of Timothy Ray Mitchell created this Life Tributes page to make it easy to share your memories.