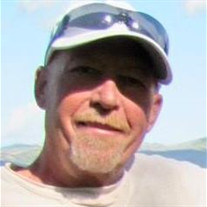 Timothy Lindin Saxton, age 59, passed peacefully on Sunday, February 25th, surrounded by family at the Utah Valley Regional Hospital. He was born on March 23rd, 1958 to Shirley Bernice Holdaway and Russell M. Saxton, in Montpelier, Idaho. He spent his early days on a ranch in Raymond, Idaho until he moved with his family to Utah, at the age of 3, ultimately landing in Provo. He was married to Donola Cave Saxton, they later separated. They had two beautiful children, Nicole Cherry Saxton and Devan Russell Saxton. Tim graduated from Provo High School, and then attended UVSC studying auto body collision and antique auto restoration, and later got a degree in diesel mechanics. He worked at Flow Serve, Kennecott, and then Younique Cosmetics. Tim was a talented singer, guitarist and artist, skilled at auto mechanics, auto body work and electronics, and an avid outdoorsman. He enjoyed working on his beloved 1940 Ford Custom, searching the wilderness for arrowheads, and spending time with his family. Tim will be remembered as a ceaselessly loving and generous individual. Tim was always willing to lend a hand, an ear, kind words or gestures. He was a gentle, selfless man, admired and loved by those who had the pleasure of knowing him. He is survived by his two children, Nicole Cherry Saxton (Terry Hodgson), and Devan Russell Saxton, and three beautiful granddaughters, as well as his brother Jeffery Howard Saxton and two sisters Robin Saxton Galbraith, and Melanie Bowen Dorton. Tim was preceded in death by his mother Shirley Bernice Holdaway, and his sister, Cherry Lynn Saxton. A memorial will be held in Tim’s honor later this summer at the “farm” in Wyoming. In Lieu of flowers, an account has been set up at www.gofundme.com/56svxyw.

The family of Timothy Lindin Saxton created this Life Tributes page to make it easy to share your memories.