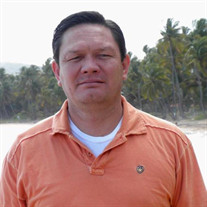 Tomas Delvin Jenks 1961 - 2021 Tomas Delvin Jenks son of Delvin and Eleanor Jenks passed away on June 17, 2021 at home. Tom was born on January 22, 1961 in Salt Lake City, Utah. When he was 9-years old his family moved to Alpine, Utah. He loved growing up in Alpine and all of the fun a boy could have in a rural setting, but Tom was always about taking care of things. He was motivated by candy and you couldn’t get it without money, so he had tried to get a job from the time he was very young. He was always a very hard worker and had done many different kinds of jobs throughout his life, he trained to be an electrician in high school, he hauled hay, he worked in the floral business for a while and sold and repaired sewing machines as well as working for a couple of Automotive shops as a mechanic until he decided to open his own shop, Alpine Tech Auto Repair. He was an eagle scout and served a 2-year mission for the Church of Jesus Christ of Latter-day Saints in the Paraguay Asuncion Mission. He was the father of 3 girls (Jessica, Malora and Kassidi) with his first wife (Brook). They meant the world to him. Jessica: When I was asked to write something about my father, I had no idea what I wanted to write, there are so many stories that I have about my dad but one story in particular popped into my head so I want to share it with you. I was visiting Dad and Erica with my 3-month-old son. I am at home alone after Dad and Erica went to work. Everything is going well until my baby decides to have a huge blow out so I call my dad bawling asking him to please come home and help me with my baby. Without hesitation he dropped what he was doing and came to my rescue. He got there and cleaned up baby. He has always been there for me no matter what. Malora: My dad set the most amazing example of honesty by embarrassing me when Kohlers undercharged him a nickel, so he dragged me back in to return the nickel, it threw the costumer service guy off and he was so surprised by how honest someone could be. It made an impression on me because I took his honesty for granted as it was something I grew up with and didn’t know how rare it was. The love he had was always unconditional. Kassidi: Tomas, I appreciate what you have taught me. Most importantly how to treat everyone with kindness, even when it was hard. A plethora of life skills that prepared me to be the independent person I am. Through all these lessons and long talks you became my best friend, my movie date, my project guide, and my valentine. You are the man who never judged a soul and always lifted me up on my worst days. I love that you could always crack a joke, that was a step too far, exactly when I needed it. Don’t worry Amelia will look after the garden and your nummy nummies collection. Tom married Erica Jarman on August 24, 2007 in Alpine, Utah. They were sealed in the Mount Timpanogos Temple on June 7, 2013. Both Tom and Erica served as ordinance workers in the Mount Timpanogos Temple and taught the youth in their ward Sunday School. Tom also served as Priest Quorum Adviser. Tom was a great influence for good on the youth of the ward and many of them would sneak back into their class even after they moved up to older classes. He was a great cook and baker with the most fabulous version of chocolate chip cookies imaginable. His favorite pastime was golfing and reading the news on KSL. He thought being a dad was great, but when he became a grandpa, nothing could compare – and his grandkids all felt the same about him. He was preceded in death by his father-in-law, Lee Jarman and will be sorely missed by his surviving family members: his wife, Erica. Parents, Del & Elly. Children Jessica, Malora Farnsworth (Bryan) and Kassidi. Grandchildren Ainsley Bass, Kamdon Beesley and Sadie & Zoe Tom, Adah, Zoie, Kyra & Luna Farnsworth and Amelia Jenks-Coleman. As well as many siblings, siblings-in-law, nieces, nephews, aunts, uncles and cousins.

The family of Tomas Delvin Jenks created this Life Tributes page to make it easy to share your memories.