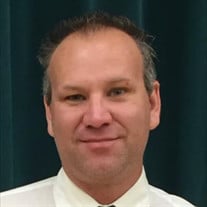 Tracy Lee Rogers 1975 - 2016 Tracy Lee Rogers was born January 2, 1975, in Monticello, Utah, to Jerri Lynn Black and Arthur W. Rogers. He passed away at age 41 on Monday, May 2, 2016, at the U of U Medical Center in Salt Lake City, Utah. Tracy spent his growing years in Mesa, Arizona, and had a real zest for life. He had a genuine heart of gold and a love for others, which was demonstrated by the way he served and treated those he came in contact with. He returned to his home in Blanding, 4 years ago. His kindness, sense of humor and spirited presence will be greatly missed by those who knew and loved him. Tracy is survived by his daughter, Skylar Viva Rogers; mother, Jerri Lynn Black Konopi; sister, Jodi Lyn Rogers MacLay (Marvin); stepsister, Jennifer Konopi Baker (Scott); Kimberly Konopi Woodside (Raymond); three nieces; two nephews; and aunts, uncles, and cousins. He is preceded in death by his father, Arthur W. Rogers; stepfather, Lawrence Phillip Konopi; brother, Shane Rogers; maternal grandparents, Leo and Veva Black; and paternal grandparents, Clarence and Reva Rogers. The family would like to thank the Blanding City EMTs, the doctors and nurses at the Blue Mountain Hospital and the doctors and nurses at the MICU at the U Of U Medical Center for their love and care in his final hours. Services will be held 11:00 am, Saturday, May 14, 2016, at The Church of Jesus Christ of Latter-day Saints' Blanding North Chapel. From 9:30 to 10:30 a viewing will be held in the Relief Society room, where family and friends may gather. Internment, Blanding City Cemetery.

The family of Tracy Lee Rogers created this Life Tributes page to make it easy to share your memories.