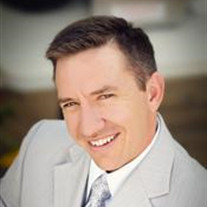 Travis Philletus Hess, age 42, died April 5th 2013 at his home in Lehi, Utah, after numerous battles with cancer spanning twenty years. Travis was born to D. Gene and Janet Bishop Hess on September 4th, 1970 at the LDS Hospital in Idaho Falls, Idaho. He was the third of eight children, 6 boys and 2 girls. Travis’s family moved from Arco Idaho to Castle Dale, Utah in 1983. Travis graduated from Emery County High School in 1989 lettering in four sports; Football, Wrestling, Weight lifting, and Track. Travis was a very talented artist. Starting at a young age he created countless paintings and carvings, giving them away freely to family and friends. Travis was chosen as the Emery High Sterling Scholar in Visual Arts and won the South Eastern Utah regional completion and was awarded a full paid scholar ship to Snow College. In August of 1989, Travis received his mission call to serve in the Germany, Hamburg mission. He returned home honorably in September of 1991. Travis loved his mission. He also served in the Utah Army National Guard for seventeen years and attained the rank of Staff Sargent. In 1991 while attended Snow College Travis met Sherry Quarnberg. They were married in the Manti Temple on March 20th 1992. They had four children and were later divorced. Travis graduated from Utah State with a Bachelor’s degree in accounting and spent his career working as an accountant. During his last battle with cancer the love and support of his co-workers at Pacific Corp was unbelievable. They donated hundreds of hours of personal time and near the very end when Travis couldn’t work they continued to donate time so that Travis did not go without a paycheck. Travis’s daughter Lexi died of cancer in September of 2000 and Travis was not in a financial position to pay for the funeral expenses. Thankfully, someone was kind enough to anonymously donate a large amount of money for Lexi’s funeral costs. Travis and his family were very touched and inspired by this act of kindness and wanted to figure out how to “pay it forward”. In 2005 Travis started the Hess Cancer Foundation to provide financial assistance to families that have lost a child to cancer and are not financially prepared for the cost of the funeral. To date, the Hess Cancer Foundation has helped 24 families (hesscancer.org). In an effort to raise money for the Hess Cancer Foundation, Travis began running triathlons and became a sponsored triathlete for team Aquaphor. He completed the Coeur d’alene Ironman in June of 2010. In 2006 Travis went to Washington D.C. representing the American Cancer Society – Utah division – for celebration on the Hill. In 2011 Travis was inducted into the Utah Summer Games Hall of Honor and was the Spirit of the Summer Games. In the spring of 2009 Travis met Merideth Briles. She would become the love of his life and strengthen him during the difficult times ahead. Travis and Merideth were married in July of 2009 and were sealed in the Salt Lake City temple on March 9th 2012. Just five days later they were blessed with their daughter Madelynne Ray Hess. Merideth and Madelynne were both an enormous blessing to Travis. They gave Travis the strength to face his final battle with cancer. He is survived by his wife Merideth Briles of Lehi Utah, Steve and Holly Briles of Eagle Mountian Utah, his children, Amber (Casey) Nye of Buena Vista Virginia, Sydney, Dallin and Madelynne. His grandmother Betty Harvey, his mother Jan Hess of Bountiful Utah, siblings Darin (Lisa) Hess of Bountiful Utah, Trent Hess of Cedar City Utah, Brandon (Susan) Hess of Hunington Utah, Angie (Martin) Welsh of Henderson Nevada, Brad (Elene) Hess of Liberty Utah and Lisa Mboule of Bountiful Utah and many nieces and nephews. He is preceded in death by his daughter Alexis Hess, father D. Gene Hess and brother John Hess. The funeral services will be held on Friday, April 12 at 2:00 pm at the LDS Chapel located at 1998 West 900 North Lehi, Utah. Family and friends may call Friday morning from 12:00-1:45 pm prior to the service.

The family of Travis Philletus Hess created this Life Tributes page to make it easy to share your memories.