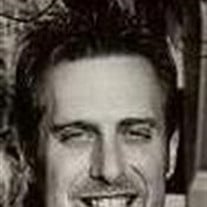 Trevor Robinson Black, 44-years-old, lost his battle to cancer on Friday, June 28, 2013 at his home in Fruit Heights, Utah with his wife Julie by his side. His strong will to live, unwavering faith in God and the love of his wife, children, family and friends was all the motivation he needed to stay on this earth for as long as he possibly could. Trevor was born on December 25, 1968, along with his twin brother Travis (his best friend), to Carol Anderson and Anton Black. He enjoyed a large, blended family which includes his brothers Travis, Justin and Jeff and his sisters January, Stephanie and Sunny; all of whom admired, loved and cherished him with all their hearts. Trevor was given the added blessing of two Mother’s, his beautiful Mom Carol (who provided constant care, companionship and laughter during some of his darkest days) and his sweet, caring Stepmom, Jean, Known for his infectious laugh and sense of humor, Trevor was the life of every party. He brought happiness and sunshine to all who met him and his friends often refer to him as The Mayor. His signature gift of joy, shown through his constant smiling, laughter, and joking around, will never be forgotten. Trevor met his Sweetheart, Julie Black, on May 30, 2011. They were blessed with a beautiful gift from God, Baxter on July 13, 2012 and married January 12, 2013 and though their time together was to be cut short, he would often tell people it was the happiest time in his life. Trevor’s most important gifts were his children. His daughter Sadi, a gifted writer, shared many of the same interests as Trevor and she often referred to her Dad as her Hero. His son Tony, a sweet, thoughtful young man always made Trevor proud and protective; and his son Baxter, a ray of sunshine during one of the hardest times in his life, was one of the biggest reasons Trevor held on to this life as long as he could. Trevor loved all his children passionately; they were his source of comfort, happiness, peace and joy. Trevor was also blessed with three step children Beau, Skye and Sean as well as two grandchildren, Bentley and soon to be born Bailey. Trevor became a born-again Christian on January 24, 2012 and his love for the Lord brought him an inner-peace which gave him the strength to endure the many hardships he experienced over the past two years as a result of his cancer. His Father Tony, also his Pastor, was Trevor’s trusted confidante and bridge to another life without pain and suffering. His father and Travis provided comfort and care for Trevor during his last week until he passed away. His surviving family members are numerous, but mainly include: Spouse: Julie Black Children: Sadi Black, Tony Black, and Baxter Black Step Children, Partners & Grand Children: Beau, Megan and Bentley Bingham and Skye and Bailey Christensen Immediate Family & Partners: Anton & Jean Black, Carol & Terry Anderson, Travis & Angie Black, Stephanie & Darrin Newland, Jeff & Nicole Tanner, January & Danny Roundy, Justin Sorenson & Jordan Mikesell, Sunny Anderson and Ric and Sharon Sorenson. Grandmother: Christine Edmunds Other Family Members: Unfortunately too many beloved cousins, nieces, nephews and blended family members to even count. A Memorial Service will be held at First Baptist Church on July 20, 2013 at 1:00 p.m. Address: 777 South 1300 East, Salt Lake City Utah, 84102. Family will visit with friends and family one hour prior to the service. Here’s to a good man – the life he lived, the hearts he touched, the legacy he left behind. A special thanks to Hospice for Utah and the loving care they provided to Trevor and the loving support they provided to his family.

Trevor Robinson Black, 44-years-old, lost his battle to cancer on Friday, June 28, 2013 at his home in Fruit Heights, Utah with his wife Julie by his side. His strong will to live, unwavering faith in God and the love of his wife, children,... View Obituary & Service Information

The family of Trevor Robinson Black created this Life Tributes page to make it easy to share your memories.