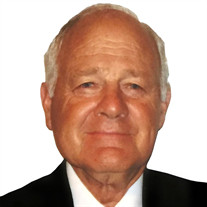 Varlan Dale Allred 1938-2017 Varlan Dale Allred passed away on December 19th in Orem, UT from pancreatic cancer. Dale was born in Lapoint, UT on January 1, 1938 to Linden and Mary Wilda Morrill Allred. He was one of nine children. Their family moved to Orem where he grew up and learned the value of hard work. He graduated from Lincoln High School. He was involved in many sports and especially loved basketball. He served in the West Spanish American LDS mission from 1957-1960. Upon return, he joined the Utah Army National Guard. After graduating in Marketing from BYU in 1964, he worked for Firestone rubber for a brief time. He then worked for JCPenney and became a store manager working in Idaho, Wyoming, California and Utah. He retired after 32 years. He was married for 30 years to Venis Kay Wade and together they had three children. After her death, he married Elaine Hawke Mayfield and became dad to four more adult children. They were married for 20 years at the time of his death. Dale loved the outdoors. He was a fisherman and loved to fish any lake or stream with his buddies and grandchildren. Fish frys were his family’s favorite, and they loved his special recipe. He also enjoyed camping in their fifth wheel with his family and friends. Dale was an avid fan of all BYU sports, especially the ones ending in ball. He enjoyed working in his workshop making wood items for family and friends. Dale and Elaine served a mission to Martins Cove in 2006. He was a worker in the Mt. Timpanogos Temple for several years making many great friends. Dale faithfully honored his membership in the Church of Jesus Christ of Latter-day Saints and served in many positions. There was nothing more important to Dale than the Gospel of Jesus Christ and his loving family. He would do absolutely anything for his family and was constantly expressing his love through service. As the neighborhood handyman, no project was too big. He is preceded in death by his parents, his first wife, his daughter- Kari, his grandson- Desert, his older sister Linda Allred and younger brother Lyle. Surviving him are his wife Elaine; children Todd (Jennifer), Pamela (Domingo) Flores; his son-in-law, David Puckering, stepchildren: Kelley (Jerry) Bastian, Mike (Megan) Plott, Mathew (Lori) Plott and Amy (Jesse) White; 25 grandchildren and 12 great grandchildren. Brothers: Verl, Martin, Kent. Sisters: Myrna Muhlestein, Jolene Frier and Lois Davis. Funeral services will be held 11:00 am, Wednesday, December 27, 2017 at the Northridge Stake Center. 1674 North 200 West, Orem UT where a viewing will be Tuesday, December 26, 2017 from 6:00 to 8:00 pm and prior to services from 9:45-10:45 am Wednesday. In lieu of flowers, please donate to Huntsman Cancer Center or Primary Children’s Hospital.

Varlan Dale Allred 1938-2017 Varlan Dale Allred passed away on December 19th in Orem, UT from pancreatic cancer. Dale was born in Lapoint, UT on January 1, 1938 to Linden and Mary Wilda Morrill Allred. He was one of nine children. Their family... View Obituary & Service Information

The family of Varlan Dale Allred created this Life Tributes page to make it easy to share your memories.