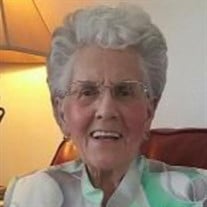 Velda Leatham Peterson, 98 years old, peacefully passed away on October 29, 2021, at her home in Eagle Mountain, Utah. She was the wife of Warren Walfred "Bud" Peterson. They were married for 57 years at the time of Bud's passing. They made their home in Hermantown, Minnesota. Velda was born on May 23, 1923 in Shelley, Idaho in a shack that had been cleaned and formerly used as a chicken coop. She was the oldest daughter of Harold Garrett Leatham and Florence Anderson. She attended Shelley High School where she graduated in 1940. After high school, Velda headed to Salt Lake City, Utah where she worked as a researcher at the Geneological Society of the Church of Jesus Christ of Latter-day Saints. Velda was a faithful member of the Church of Jesus Christ of Latter-day Saints. She served a full time mission to the North Central States Mission headquartered in Minneapolis Minnesota from 1946-1947. In 1948, she married her sweetheart in the Idaho Falls Temple. Together they served another mission to the Mexico Torreon Mission from 1981-1982. After her marriage Velda continued working in her chosen field of retail clerk. She was employed by the local Target for many years and retired in 1980. Velda served in many church callings while living in Hermantown, Minnesota. When she was Relief Society President for the Duluth, Minnesota Branch, she would often cook and bake for those in need. Missionaries would often grace their Sunday dinner table and/or holiday meals. Velda loved gardening, quilting, and playing her organ. She will also be remembered for her stories of growing up on the farm. Velda is survived by her four children. Kent (Christine) Peterson of Duluth, MN; Brian (Sandra) Peterson Irvine, CA; Barbara (Eric) Chase Mountain Home, AR and Sharon (Brent) Lindsay Eagle Mountain, UT. She is also survived by 1 remaining brother, Douglas (Sharon) Leathem of Idaho Falls, Idaho. Bud and Velda had 18 grandchildren and 44 grandchildren. She was predeceased by her husband Warren Walfred Peterson, Her parents, Harold Garrett Leatham and Florence Anderson. 4 brothers, Marvin, Robert, LaMar, and Dale Leatham, and 1 sister, Carol Converse. Also 3 great-children preceded her in death. The funeral service will be held Saturday, November 6th, 1:00 pm at the Church of Jesus Christ of Latter-day Saints, 4338 East Inverness Rd, Eagle Mountain, Utah. A viewing will be held prior from 11:30 - 12:45 pm. Interment at Sunrise Cemetery in Hermantown, Minnesota. A celebration of life will be held in Duluth, Minnesota with a date to be determined.

Velda Leatham Peterson, 98 years old, peacefully passed away on October 29, 2021, at her home in Eagle Mountain, Utah. She was the wife of Warren Walfred "Bud" Peterson. They were married for 57 years at the time of Bud's passing. They made... View Obituary & Service Information

The family of Velda Leatham Peterson created this Life Tributes page to make it easy to share your memories.