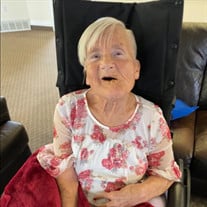 Jules was born in Salt Lake City to Edward Behm & Venna Gee Behm. She had a beloved twin sister, Cheryl Darlene Behm Brown (Cheryl died in a car accident in 1995). They were born with cerebral palsy, their mom died in childbirth. Jules was a member of the Church of Jesus Christ of Latter-day Saints. She moved to Orange County, California when she was 25. She earned a Human Service degree at Santa Ana College. She rode a 3 wheeler adult bike all over Orange County and was very independent. She loved Disneyland. She loved the California beaches and the ocean. She always called herself a California Girl. Jules moved back to Salt Lake in 2006 to be closer to family and for new adventures. She got involved with The National Ability Center – with them she went camping, she ran the Snake River out of Jackson, she ran the Colorado River out of Moab, she snow skied several season with them. She water skied on Jordanelle. Her other adventures included floating the river in Lava Hot Springs with her family. She had a good friend take her skydiving. She rode in a small plane around Salt Lake and was able to steer it. She spent a week at Lake Powell with her family. She made several trips back to California to Disneyland, San Diego Zoo and to the ocean. When her life started slowing down one of her favorite things was to listen to books on her Ipad. Her sister Jennifer would come every week and put new books on it for her. She felt like she had many new adventures through the gift of books. She loved music, she owned over 300 CDs. She went to a Pavarotti concert here in Salt Lake. She went to see Rod Stewart in Las Vegas. She started to have her hair colored bright pink and bright blue (pink for herself and blue for her twin sister) and sometimes a rainbow of colors. Thanks Laura! She once told a friend “I’m the captain of my own ship!” She didn’t let her disability stop her from enjoying her life. The family would like to thank the staff at Country Lane for taking care of her and the Hospice team for their care. Funeral services will be Tuesday, May 25, 2021 - viewing at 5:30 pm, funeral at 6:30. Premier Funeral 67 East 8000 South, Midvale 84047. In lieu of flowers please make a donation to The National Ability Center.

Jules was born in Salt Lake City to Edward Behm & Venna Gee Behm. She had a beloved twin sister, Cheryl Darlene Behm Brown (Cheryl died in a car accident in 1995). They were born with cerebral palsy, their mom died in childbirth. Jules was... View Obituary & Service Information

The family of Venna Julene Behm created this Life Tributes page to make it easy to share your memories.