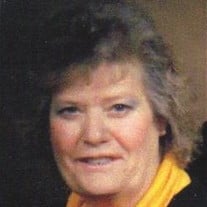 Vera Hayward 1932 - 2016 Vera Christensen Lewis Hayward, 83, was born June 18th, 1932 to Harry Ernest Lewis and Ida Christensen Lewis in Salt Lake City, Utah. She died peacefully on May 4th, 2016. She married Charles “Chas” Henry Hayward on April 24th, 1954 and were later sealed in the LDS Jordan River Temple on September 28th, 2002. Vera and Chas raised their family in Salt Lake City, Utah. They have three sons and three daughters, Larry (Irene) Hayward, Paulene (Rich) Fabert, and Shirlene (Rocky deceased) Charon, Terry (Wayne) Robinson, Lawrence (Sheree) Hayward, Lamar (Tracee) Hayward. As well as 22 Grand Children and 41 Great Grand Children. Vera worked in the legal profession for many years as a legal secretary prior to becoming a paralegal for Parsons, Behle & Latimer. She retired from Parsons, Behle & Latimer in 1994. She and her husband bred and showed Shih Tzu’s, small oriental dogs and finished several champions. They loved this hobby and were active in various Kennel Clubs. She was past president and secretary of both the Intermountain Kennel Club and Kopper Valley Shih Tzu Club. They were active in the past with the L.K. Antelopers, a local chapter of Good Sam. They enjoyed traveling in their motor home with good friends in the Good Sams. She is past president and secretary of the L.K. Antelopers. She was preceded in death by her parents, sister and brother: Harry, Ida, Shirley, and Harold “Hack”. She is survived by her husband of 62 years, Chas; her sons and daughters; 22 grandchildren; and 41 Great Grandchildren; Brother James B. “Jim” (Joanne) and daughter in law Sandy. Funeral services will be held 11:00 am, Tuesday, May 10, 2016 at the LDS Church at 287 West River Chapel Road, Draper, UT where a viewing will be held Monday, May 9, 2016 from 6:00 to 8:00 pm and Tuesday prior to services from 10:00 to 10:45 am. Interment at Elysian Burial Gardens 1075 East 4580 South, Murray, UT.

The family of Vera Hayward created this Life Tributes page to make it easy to share your memories.