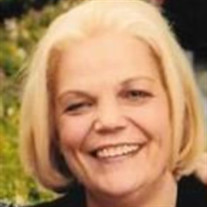 Vera van der Veer Stephens 1951-2021 On Monday March 1, 2021 Vera van der Veer Stephens passed away peacefully in her home at the age of 70. Vera was born on January 22, 1951 in Amsterdam, the Netherlands to Adrianus and Agatha (de Boer) van der Veer. She graduated from the Hogereburgerschool A in 1969. Vera married her husband Robert Ellwood Stephens on May 1, 1976 in Zollikofen, Switzerland. They raised two daughters, Vanessa and Amber, while traveling the world for Robert’s work. They lived in the Netherlands, Monaco, France, Germany, and the USA. Vera received a diploma in French Literature from the Université de Nice in 1978 and graduated from BYU, magna cum laude, in 1995 with a degree in French. She later received her teaching certificate in special ed and secondary education for French and German. For many years she taught French, German, math, and social studies to troubled youth. Her faith and her family were most important to her. She chose to follow the example of her mother in serving The Lord. She loved and cared for people deeply and loved to be of service. If there was something she could do to help she would do it, even if it meant giving up hours or days. She was genuinely interested in people and in their lives. Vera loved her husband and children. She was a fun mom but still had high expectations for her daughters. The last 25 years of Vera’s life were marked by MS, various cancers and many other physical ailments, which she endured because of her faith. Throughout these years she continued to care for others by sending cards and flowers. Despite these difficulties, Vera felt that she had lived a fulfilling life. Vera was preceded in death by her parents, Adrianus and Agatha (de Boer), and her brother, Alexander. She is survived by her husband Robert; her children, Vanessa (Christian) and Amber (Nolan); her siblings, Mia, Hebert, and Robert; and her grandchildren Bobby, Lucas, Amber, Mila, and Graham. Due to covid restrictions, a graveside service will be held for immediate family only on Saturday, March 6, 2021 at the Bancroft, Idaho Cemetery.

The family of Vera van der Veer Stephens created this Life Tributes page to make it easy to share your memories.