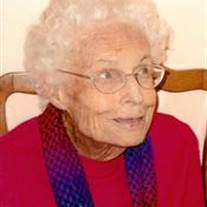 Verda Carlile Dallon was born on 23 February 1911 in Heber City, Utah to John Williamson and Emma Giles Carlile. She passed away 2 December 2012 at her home in Lehi, Utah. Verda married Frank S. Dallon 6 July 1931 in Heber City and moved to her first home, a tent house, on the desert west of the Boulder City, Nevada town site which was about one year from being ready for its first occupants. They had three sons and followed dam-construction projects in Nevada, Arizona, California, Utah and back to California before retiring in Salt Lake City in 1970, to be closer to family members. They were active members of the Church of Jesus Christ of Latter Day Saints at all levels in the Ward and Stake. They were sealed as a family in the Logan Temple 8 June 1953. Verda enjoyed visiting with friends and family members, gardening, oil painting, travel, walking and hiking the mountain trails, needle work, jig saw and sudoku puzzles. She was preceded in death by her parents, three brothers, two sisters, and her husband of seventy four years. She leaves three sons: Frank W. (Kay), Dale S. (Barbara), Earl C. (Linda), thirteen grand children, fifty great grand children and twenty two great- great grand children, numerous nephews, nieces, and cousins and many, many friends. Her grand influence on all will surely be missed. There will be a viewing Friday night, 7 December from 7 to 9 p.m. and again at 9:30 to 10:45 a.m. on Saturday 8 December, prior to the services at 11:00 a.m., at the Lehi Utah North Stake Center located at 650 East 3200 North, Lehi, Utah. Interment will be at Wasatch Lawn Memorial Park, 3401 South Highland Drive in Salt Lake City.

The family of Verda Carlilie Dallon created this Life Tributes page to make it easy to share your memories.