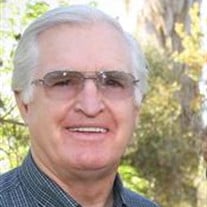 Mr. Wilburn L. Holland (Vern), age 72, returned to his Father in Heaven on Thursday, April 5, 2012, following complications of pancreatic cancer. Vern was born October 10, 1939, in Coolidge, Arizona. He lived in Arizona for many years, before moving to Utah in 1980. He served in the Army, served in the LDS Northwestern States mission, received his Bachelor’s Degree from Arizona State University and worked in numerous sales positions throughout his life. Vern was an active member of the LDS Church and served many years at the Mount Timpanogos Temple. Survivors include his wife Carol and siblings Geri, Donna, Norma and Ric, He is also survived by children Steve, Lisa, Clay, Trent and Chad and step-children Michael, Melanie, Michelle and Martha. Vern has 25 grandchildren and one great-granddaughter. He was preceded in death by his parents Johnny and Orvela, sister Audrey Maxine and granddaughter Rachel. Funeral services will be held 11:00 am, Monday, April 9, 2012 at the American Fork 21st Ward, 261 North 900 East, American Fork, UT with a viewing at the church Sunday from 6:30 to 8:30 pm and Monday prior to services from 9:45 to 10:45 am. Interment at the American Fork Cemetery.

The family of Vern Holland created this Life Tributes page to make it easy to share your memories.