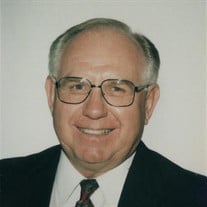 Vern Watt Wood 1936 - 2019 Vern Watt Wood, 82, passed away peacefully, surrounded by loved ones, at his home on Monday, January 21, 2019. He was born November 18, 1936 to Melvin John Wood and Verna Harris Watt in Layton, Utah and grew up in Thatcher, Utah. The last of four children, Vern enjoyed growing up on the farm and learned the value of hard work from his father, older brothers, and sister. He always valued those relationships as they were some of his greatest memories and joys in his early life. Vern graduated from Bear River High school, and later, Utah State University, after attending BYU and The University of Utah. He enjoyed being a cheerleader in high school and was involved in other extracurricular activities while at Utah State. He was also Veteran of the United States Army as a First Lieutenant in Artillery. He spent his lifelong occupation as a sales rep for men's and women's apparel and also spent time working in sales for an engineering firm. After retirement, he spent time volunteering in the Olympics and enjoyed talking to visitors from all over the world. Vern married the love of his life in the Logan, Utah Temple of The Church of Jesus Christ of Latter Day Saints on June 7, 1968. Together they had 5 children with whom he loved spending time. He loved skiing, camping, and boating, and taught his children to love the outdoors and to find joy in God's many beautiful creations. He coached many of his children's soccer teams and had many teams that were very successful at a state wide level. He valued competition and meticulously taught those that he coached to learn the details of their sport, which always led to success. He took great pride in the scouting program and spent countless hours mentoring his own sons and many others in that capacity. Service in the church, and service to God was Vern's highest priority throughout his entire life, and he approached that service with humility and diligence, knowing that God had a work for him to do. He served a mission as a young man in Northern California, and later with his wife, in the New York Utica Mission on the Cornell University Campus with the young single adults. Vern valued this service, and loved the joy that others felt as they came to learn of their Savior and the plan that he has for them. He also had callings in various bishoprics, and the Meadows Branch Presidency throughout his time in church service. He also served as an ordinance worker in the Bountiful Temple. Vern had a gift of being able to communicate and connect with those of all ages and from all backgrounds. He loved talking to friends and acquaintances, and would often disappear for hours when running into a friend on a "short" visit to the hardware store. When one of kids went with him they were always rewarded with a donut from Dick's bakery for their long wait. Vern is survived by his wife Eileen, his children, Jason (Mandy), Michelle, Jodi (Darren), Phillip, Dallin (Nataly) 14 grandchildren, and his sister, Ann. He is preceded in death by his parents, and older brothers, Rulon and Ted. Funeral services 11:00 am, Friday, January 25, 2019 at the Bountiful North Stake Center, 1550 North 400 East, Bountiful, Utah where a viewing will be held Thursday from 6 to 8 pm and Friday prior to services from 9:45 to 10:45 am.

The family of Vern Watt Wood created this Life Tributes page to make it easy to share your memories.