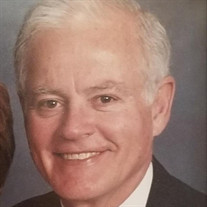 Vernis C Whisenant Jr. 1939-2020 Vern was born on July 16, 1939 in Houston, Texas, the first of four children of Vernis Carrol Whisenant Sr and Lillian Ophelia Jackson. Vern was nine when he was baptized in the Church of Jesus Christ of Latter-day Saints along with his mother Lillian and his brother Keith, beginning a life-long, unwavering commitment to the Church. After attending Houston area public schools, Vern enrolled at Brigham Young University where he fell for pretty Bonnie Christian. In 34 years of marriage, Vern and Bonnie raised seven children: Gerald (Jill), Kevin (Sarah), Brad (Laura), Jeff (Ruth), Chris (Tami), Rebecca Holt, and Michael (Irina). After living a couple of years in Houston, Vern and his family returned to Utah and ultimately to BYU. Vern showed great fortitude while taking a full load of classes at BYU during the day and working fulltime at Hercules Powder in the west Salt Lake Valley in the evening. After graduating from BYU in math and physics, Vern started a career spanning almost 30 years at IBM in Salt Lake City, ultimately employed as Marketing Manager. Following an early retirement, he started a small technology company. Vern met lovely Donna Hamilton Fullmer in the Provo Temple in 1993 and they were married in the Salt Lake Temple on August 5, 1994. Donna has six children: Vickie, Markae (Cory) Evans, Stephanie (Ray) Bori, Nikki (McKay) Pinegar, Breck (Heather), and Quinn (Britnee). Throughout his life, Vern was happy serving in the Church, including as Bishop and Stake President, High Councilor, and Home Teacher, but none gave him greater satisfaction than fulfilling five fulltime missions with his dear companion Donna, first in England, then Ghana, Salt Lake City, and finally twice in Nauvoo. On 20 November 2020, at his home, Vernis Carrol Whisenant Jr (“Vern”) passed from this life to the next, with Donna, his cherished companion of more than 26 years, at his side. He was proceeded in death by his parents and brother Keith. Vern is survived by his beloved Donna, his seven children, 28 grandchildren, 19 great grandchildren, Donna’s six children, her 16 grandchildren, seven great grandchildren, Vern’s sister-in-law Mary Jane, brother Doug (Eleanor), and sister Pam Worthington. A graveside service will be held for immediate family members only and a memorial service will be held at a later date.

Vernis C Whisenant Jr. 1939-2020 Vern was born on July 16, 1939 in Houston, Texas, the first of four children of Vernis Carrol Whisenant Sr and Lillian Ophelia Jackson. Vern was nine when he was baptized in the Church of Jesus Christ of Latter-day... View Obituary & Service Information

The family of Vernis C. Whisenant Jr. created this Life Tributes page to make it easy to share your memories.