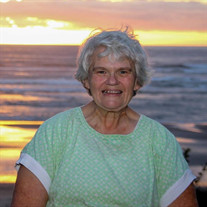 Vicki Lee Curtis Fotheringham 1949 - 2017 Vicki Lee Curtis Fotheringham, of West Valley City, Utah died Friday, January 13, 2017 after a lengthy battle with cancer. She passed away peacefully at home surrounded by the love of her family and children. Vicki was an accomplished artisan, seamstress, avid square dancer and loved to travel. Vicki spent the last several years of her life researching genealogy and her Curtis/Lee family history. She was an avid amature photographer, she loved to document her travels through the camera lens. Vicki was a compassionate and caring person, she was a caregiver to her late husband, and her cousin. She touched and helped numerous people through her cancer support groups. She gave hope to many and was an inspiration as she square danced through her cancer treatments. She was studying Naturopathic Medicine so that she could help others through natural medicine. Born in Toledo Oregon, September 27, 1949, Vicki is preceded in death by her parents Leon and Marian Curtis, her husband, John Michael Fotheringham, her sister Sylvia, and brother Roger. She is survived by her siblings, Leeann Patterson, Darlene Boggs, Jack Curtis, and Rick Curtis; her children Daniel Conley, Rebecca Holt, Adeana Foerster, Donald Conley, Elizabeth Guilkey, Eric Conley, Lisa Jenkins, Brian Conley, Kristi Conley, Stephanie Sunday, Cindy Allman, 37 grandchildren, and 5 great grandchildren.

The family of Vicki Lee Fotheringham created this Life Tributes page to make it easy to share your memories.