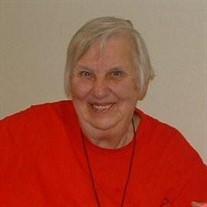 Virginia Pauline Butler, aged 90, peacefully passed away 13 December 2019. She was born in Buffalo, NY, the daughter of the late James Michael Butler and Vivian Grace Wood Johnston. Virginia grew up in Nova Scotia and eventually found herself working in Calgary, Alberta, and finally moving to the Salt Lake Valley. Among her hobbies, she was an avid reader, she enjoyed good music, and her handwork (knit and crocheted) was beautiful. You will appreciate this...she was watching the final NASCAR race sitting in Magna and I was watching it in Beltsville....as Kyle Bush came flying across the finish line to take the championship for 2019, my phone ringing and when I answered it...a triumphant shout, did you see that!!! She was ecstatic that Kyle had won...would have thought he was her son.... Survived by children, Beverley (Tom, deceased) Sumpter, Beltsville, MD, Bryan Seelye, Magna, Utah, Wendy Seelye, Bedford, Nova Scotia, and George Kiley, Winnipeg, Manitoba; also surviving are thirteen grandchildren and seven great grandchildren. She is preceded by her parents, two sons, Michael (2018) and Lawrence (2004), her brother William (2010), and three grandchildren. There will be a Celebration of Life at Martha’s Terrace, her residence for the last fourteen years at a later date. Eternal rest grant unto her, O Lord, and let perpetual light shine upon her. Rest easy, Mum.

The family of Virginia Pauline Butler created this Life Tributes page to make it easy to share your memories.