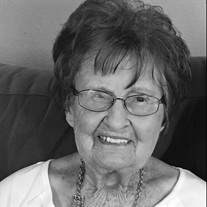 Virginia Hirschi Lorscheider Virginia entered this world on October 17, 1923 arriving at a little-known corner of the world called Park Valley, Utah. She was the second of 6 children born to Louis and Elizabeth Hirschi. She grew up fast in the pioneer tradition and learned early how to cook and keep house for her family and ranch hands…she enjoyed few luxuries. Virginia graduated from Box Elder High School and, soon after, met a dashing young man at one of the local dances in Brigham City. Brigham City had a bustling military hospital base with loads of eligible bachelors to choose from, but in the end, Virginia chose our kind dear father, Carl J. Lorscheider, who hailed from Springfield, Illinois. She married Carl in the Logan LDS Temple and remained active in the Church throughout her life. Virginia had six children, 18 grandchildren, and 27 great grandchildren. She is survived by all six children, Sandra White (Bill), Michael (Carol Ann), Wendy Collmar, Brent (Gyl), Craig (Joni) Kaylene Peets (Peter), and by a sister Joyce Meldrum. The term “homemaker” does not begin to describe what Virginia did for her family, our family. Although our family had limited resources, our home was rich with the smells of fresh baked goods and home preserves…we never went hungry. Her beautiful hands were seldom idle as she sewed clothes, cooked and cleaned for six rambunctious children. Later on, these hands nurtured and loved her grandchildren and great grandchildren, and cared for Carl after he had a stroke. In the twilight of her life, up to her last week, these well-worn hands continued to serve as she made quilts for her family. Virginia joined her dearly departed husband on August 23, after touching so many lives. The void left by her passing will never be filled, but we take solace in knowing she now walks with angels. Her Funeral will be held at 10 am on Sept 7 in the Grandview 10th Ward, located at 1600 N. 1880 W. Provo, Utah. A viewing will precede the funeral from 9:00 to 9:45 am. Virginia will be laid to final rest, next to her husband, in a graveside service at the Brigham Cemetery at 3 pm on Sept. 7.

Virginia Hirschi Lorscheider Virginia entered this world on October 17, 1923 arriving at a little-known corner of the world called Park Valley, Utah. She was the second of 6 children born to Louis and Elizabeth Hirschi. She grew up fast in... View Obituary & Service Information

The family of Virginia Hirschi Lorscheider created this Life Tributes page to make it easy to share your memories.

Virginia entered this world on...