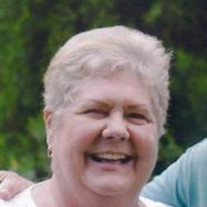 Virginia Lynn (Ginny) Peterson was born in Atlanta, Georgia, August 12, 1948. She died January 27, 2014, in Salt Lake City, Utah, after a long battle with cancer. She fought the good fight and now she is finally at peace, with no pain. Ginny, was raised in Decatur, Georgia, just outside of Atlanta. Ginny attended elementary and high school in Decatur, Georgia, and graduated from South West DeKalb High School in 1966. Ginny attended Brigham Young University from 1966 to 1970, where she studied Marketing. From that time until her passing she made Utah her home. Ginny was a tireless advocate for childhood immunization causes and as an employee of Community Nursing Services she helped improve Utah’s child immunization rate from one of the lowest in the nation to near the top of the list. Ginny loved to garden, shop and travel. She spent many holidays and weekends boating and fishing at Flaming Gorge Reservoir with her longtime friend James Corbett. Ginny especially loved to travel to Mexico during the winter months where she would parasail, bask in the sun, sit on the beach, and read good books. Ginny was an immaculate dresser, wore the latest fashions and styles, and loved to decorate her apartment, house, or were ever she lived with the finest furnishings and pieces of art. For a time, Ginny made her living as an interior decorator. Ginny liked to organize and plan special events, get-togethers and parties, and was a gracious host who knew how to turn any gathering into a memorable, entertaining, and successful event. She was an excellent cook and was especially known for her potato salad recipe. Ginny was a thoughtful, kind, considerate and compassionate woman who would give you the shirt off her back if you were in need. Although she had no children of her own, she made up for it by showering her nieces and nephews with love and compassion. Her love and concern for children led to her employment as a substitute teacher later in life. Ginny is survived by a sister Elaine (Monte) Smith, Gilbert, AZ; brother, Chandler Peterson, Pasco, WA; longtime friend James E. Corbett, Salt Lake City, UT; and nieces and nephews Stephanie Lucas, Holly Kreutz, Brooke Hadlock, Ryan Peterson, Natalie Munns, Corina Manning, and Nick Peterson. She was preceded in death by her parents Maurice Franklane and Mary Ellie Peterson. Ginny’s family would like to thank James Corbett’s family, particularly James’s daughters Betsy Steindl and Claudia Deines who were longtime friends and looked after Ginny during her sickness. Special thanks also goes to Sherrill Sandberg and the members of the Highland Park Ward who took such good care of Ginny administering to her spiritual and temporal needs. Ginny will be sorely missed by her friends and family until we meet again.

Virginia Lynn (Ginny) Peterson was born in Atlanta, Georgia, August 12, 1948. She died January 27, 2014, in Salt Lake City, Utah, after a long battle with cancer. She fought the good fight and now she is finally at peace, with no pain.... View Obituary & Service Information

The family of Virginia L Peterson created this Life Tributes page to make it easy to share your memories.