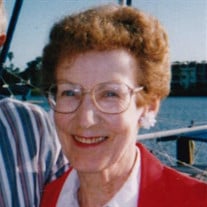 VIRGINIA SABO Virginia K. Sabo, 90, of Cottonwood Heights, Utah, and formerly of Fairport Harbor passed away on Tuesday, Jan. 24, 2017, at the Coventry at Cottonwood Hts. Assisted Living facility in Cottonwood Hts, UT. A private family gathering will be held in late July to honor her life and wishes. Virginia (Gini) was born in Philadelphia, PA on Sept. 5, 1926, to the late Frederick and Elsie (Koch) Klenk and was the second of five children. She grew up in Pennsylvania, Ohio, West Virginia, Utah, Nevada, and moved to Lake County during her high school years. She was preceded in death by her brother Richard and sister Phyllis and is survived by sister Shirley and brother Robert. She was married to Edward A. Sabo for over 64 years until his death in June of 2016. She is survived by sons Daniel (Nancy) of Cottonwood Hts., UT; Richard (Susan) of West Chester, PA; Dusty (Yuko) of Ashland, OR; David of Oxford, OH and granddaughter Yuki. Gini and Eddie enjoyed many summers boating and water skiing on Lake Erie. She also loved to play cards, dance, and travel. She and Eddie spent some of their retirement residing in Venice, FL for part of each year at Harbor Lights, a retirement community located on the Intercoastal Waterway.

The family of Virginia Klenk Sabo created this Life Tributes page to make it easy to share your memories.