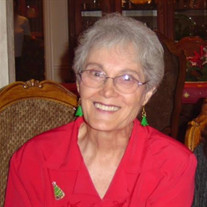 Voeta “Vo” Larson 1933 - 2017 Voeta (Vo) Larson returned to our loving Heavenly Father on February 21, 2017. Born in Pocatello and raised in American Falls, Idaho, Vo was a true farm girl. Her parents, Elwood and Elizabeth Meadows, owned a large dry farm south of town. She and her twin sister lived in town in the winter time and spent their summers on the farm. Vo had fond memories of growing up in the small town. Though Vo’s family was inactive in the LDS church, her uncle Vard invited her to come with him and his family to church every week. As a teenager, Vo read and received a testimony of the Book of Mormon. Her testimony remained strong all of her life. Vo married Roger Larson in Salt Lake City in 1961. They had two sons, TG and Eric. Roger left them after three years and Vo raised the boys on her own. They moved to Boise to be closer to family where she worked hard to support the boys, often working two jobs to make ends meet. Vo spent most of her career as a bookkeeper and kept her own books meticulously. Vo’s loved her boys dearly. She took them camping, sledding, and floating the Boise River. She raised them in the gospel and both served LDS missions. After the boys returned from their missions, Vo served a mission in the Philippines. She lost her son Eric to leukemia when he was 30 years old. Shortly after TG married in 2001, Vo moved to Sandy, Utah to be closer to him. Though she thought the day would never come, Vo finally became a grandma at age 70. Every day, she would come over and watch her grandkids. It was a great time in her life. She commented that she missed out on her boys’ childhoods because she was working. As each new grandchild came, she would spend countless hours with them, soaking in everything they did. Vo lived with TG and his family for the last few years before going into assisted living. The grandkids enjoyed going to her room to visit her. They loved going up and down on her electric bed and getting treats from her. She loved her grandchildren dearly. Vo is survived by her son TG (Julie) and their children Don, Summer, Eric, and Joy. She is preceded in death by her son Eric, her twin sister Loeta, and her parents. Funeral services will be held on Saturday, March 4, 2017 at 9:30 am at the Corner Canyon 2nd Ward, 13366 South 1300 East, Draper. A viewing will be held from 8:30 am to 9:15 am prior to services. Interment will be at 4:00 pm that afternoon at the American Falls Cemetery, American Falls, Idaho. Special thanks to Scott and Amber with AFI Hospice and Country Lane Assisted Living.

The family of Voeta May Larson created this Life Tributes page to make it easy to share your memories.