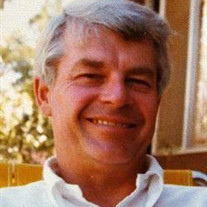 Wallace Alexander “Buck” McLean Died on 12/3/2014 in Ogden, Utah. Born in Fort Worth, Texas on 2/2/1931 Survived by brother William Pinckney IV; daughters, Ellen Lake and Elizabeth McLean; sons, William McLean and David McLean; daughters-in-law, Emily Bench and Carlotta McLean; son-in law, David Lake, and grandchildren, Katherine Hicks, William McLean, and John Henry McLean; preceded in death by sister, Angelique McLean Graziano. An outstanding athlete at Paschal High School in Ft. Worth, TX in both football and track, Buck attended the University of Oklahoma where he eventually earned his law degree. During his college years, Buck earned the moniker "El Zorro del Norte" while serving in the United States Army in Alaska. After law school, Buck practiced law in Austin, TX before pursuing his fortune in the Mountain West. His western journeys took Buck to Salt Lake City, Utah, Bainbridge Island, Washington, La Jolla, California, and Eden, Utah. Buck was an avid outdoorsman, from bird hunting in Texas to paddling the blue waters of Yellowstone Lake. He particularly enjoyed fly fishing from his canoe. When Buck couldn't be in the outdoors, he loved reading stories of the trappers and explorers who pioneered the American West. Always surrounded by friends, people were naturally attracted to Buck’s warm and gracious manner and his easy company. He loved to entertain the people around him with his humorous tales. Everyone felt comfortable with Buck. A gifted storyteller, Buck loved to write. Whether it was letters, poetry, fiction, or screenplays, his humor and wit stood out. Buck was a 4th generation Texas attorney, raconteur, star athlete, outdoor adventurer, writer, and chili aficionado. He loved his family and friends dearly, and was loved in return. Buck said of himself, "My life had a wonderful cast, just some trouble with the plot.” He will be missed by all. A gathering of family and friends will be held at the Bar-X in Salt Lake City, UT on December 14, 2014 from 3:00-6:00 p.m.

The family of Wallace "Buck" Alexander McLean created this Life Tributes page to make it easy to share your memories.