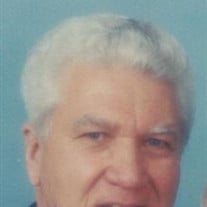 Wallace Edward Rasmussen, 83, beloved husband, father, grandfather, uncle and friend, passed away peacefully surrounded by his wife and loved ones on Tuesday, July 21, 2015. Wally was born on May 16, 1932 in Mount Pleasant, UT to the late Jenny Peel and Arthur F. Rasmussen. He was the youngest of 10 children, all of whom proceed him in death. Wally’s mother passed away when he was 3. Wally was then lovingly raised by his step-mother Pauline Monson Rasmussen. Wally attended and graduated from North Sanpete High school in 1950. Upon graduation he joined the Utah National Guard, the Artillery Battalion from Mount Pleasant, UT. Wally served actively during the Korean Conflict. While in Korea he was awarded the Bronze Star. His battalion was in charge of keeping communications open between forward observers, the command post and the Artillery guns. Wally was instrumental in developing a system for night firing guns. Wally was honorably discharged from the military. Soon after his service in the military he served a two-year mission for the Church of Jesus Christ of Latter-day Saints in Brainerd, Minnesota. Upon his return, he married his sweetheart Norma Johnson on July 25, 1958 in the Manti LDS Temple. To this union were born two sons, whom were his pride and joy. Self-taught, Wally became an Electrical Power Engineer. Working most of his career for Western Electric/ Mountain Bell. Installing all equipment in the Central Offices and Microwave stations. Wally along with his family lived and worked in 7 different states. He received several awards for developing a system for Conserving Power. He retired from US West. Wally was an active and faithful member of the Church of Jesus Christ of Latter-day Saints, serving in numerous positions and callings both on the Ward and Stake level. Wally started the first branch in Bennet, Colorado and served as its first Branch President. He was a dedicated Temple Worker. Wally was Happiest serving others and being with his family. He was very handy, he could fix, repair or build anything. He was handsome with beautiful eyes. Wally enjoyed spending time with his good friend Dan Plots, hanging out, talking and riding their bikes. Wally loved flying airplanes, he loved spending his leisure time traveling in his motor home. He loved to camp, fish and hunt, especially with his boys. Square dancing was a favorite past time, serving a term as President of the Utah Association. Wally loved most of all his family and family gatherings. He loved to Dutch-oven cook. Wally was famous for his sourdough pancakes, a family tradition!!! Wally is survived by his wife, Norma J. Rasmussen; sons, Daren and Karl Rasmussen; and 5 grandchildren, Colton, Heather, Karlee, Kaycee, Konner. Funeral services will be on Tuesday, July 28, 2015 at 11:00 a.m. at the Union Park 2nd Ward building, located at 700 E. 7500 S., Midvale, UT. Viewing will be on Monday, July 27th from 6:00 to 8:00 p.m. and one hour prior to the services, at the church. Interment will be at the Mount Pleasant Cemetery following the services.

Wallace Edward Rasmussen, 83, beloved husband, father, grandfather, uncle and friend, passed away peacefully surrounded by his wife and loved ones on Tuesday, July 21, 2015. Wally was born on May 16, 1932 in Mount Pleasant, UT to the late... View Obituary & Service Information

The family of Wallace Edward Rasmussen created this Life Tributes page to make it easy to share your memories.