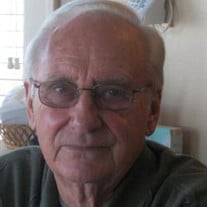 "Don't be lazy." The mantra of: Wallace Vinanti; Husband, father, friend, and master salad maker died on May 29, 2014. Wally was born to immigrant parents who immigrated from Italy during The Depression. His father Pietro Vinanti, a coal miner, died of black lung when Wally was only 4 leaving his mother the task of building a life for herself and Wally. She then moved to Idaho where she raised Wally on her own. Wally loved his mother Viola Asson Vinanti with all his heart until her passing in 1978. Wally married Viola Baxter Vinanti, they were together for 31 good years until she passed away in 1990. Together, they had 4 children; Kayleen, Kelly, Pete, and Paulo. In 1991, Wally met and married Darlene Boyer Vinanti and his family grew to include 4 new daughters; Deann, Kerrie, Cherie and Nicki He lived a long and good life, shared the joy and problems that come with family, worked hard and long all his life to provide for the people he loved and he was always up for a good party with friends and family. There was always a bottle of Tavoli under the sink for good or bad times. Wally held many other roles whilst making his mark on this world; Farmer (Rupert), Hellion (Burley), Student (Minico High School class of 52), U.S. Army Veteran (Germany 56-58) , Miner (Lark), Truck Driver (R.E.A.), Dock Worker and Dispatcher (Consolidated Freight). Let us not forget Practical Joker, loved and remembered by most who worked with him and always by his family and friends. The list isn't short, he never discriminated against anyone and we all treasure this part of Wally. Wally employed in these jobs and a plethora of part time work to make it through the lean times and poor days. He developed many friendships with the people who were lucky enough to experience his work ethic and had the best sense of humor you could ask for. Wally was called a lot of things; Husband, dad, grandpa, boss, lover, friend. But those of us who walked with him on life's road know that when our walks are over he will be there waiting for us with a sip of vino, a smile on his face and a warm open-armed hug. Please grab your favorite wine and raise a glass and "Salute" in his honor and then join us at St. Joseph the worker Catholic Church, 7404 South Redwood Road on June 3, 2014 between 6 and 7 pm for his viewing and between 7 and 8pm for the vigil. Let's celebrate and remember that for us that have had the honor to be blessed with him in our lives, we are thankful and yet ever so sorrowful in the knowledge that he has finished his walk but he did it with pride, courage, and style and that's exactly the way he would have us remember him. Funeral Mass will be on Wednesday, June 4, 2014 at 11:00 a.m. at St. Joseph the worker Catholic Church. Wally has asked that in lieu of flowers please make a donation in Wally's name to St. Joseph the worker Catholic Church building fund by calling (801) 255-8902 or to the Huntsman Cancer Institute.

"Don't be lazy." The mantra of: Wallace Vinanti; Husband, father, friend, and master salad maker died on May 29, 2014. Wally was born to immigrant parents who immigrated from Italy during The Depression. His father Pietro Vinanti, a coal... View Obituary & Service Information

The family of Wallace Joseph Vinanti created this Life Tributes page to make it easy to share your memories.