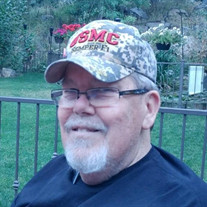 Walter James Cunningham, Jr. died on Thursday, April 5, 2018 at the George E. Wahlen Veteran's home. He suffered for the past seven years with leukemia, and recently with a brain tumor. Walt was born on July 24, 1956 in Rockford, IL to Walter and Violet (Verkuilen) Cunningham. He was raised in the Victory Homes where he was surrounded by family and friends. He enlisted in the United States Marine Corp and served his country proudly for four years. He married Joyce Molitor in 1979 and together they had a daughter Michelle. They were later divorced. After finishing his enlistment with the Marines, he became a truck driver. He drove for various companies, including Mueller Pinehurst, where he was affectionately called "The Ice Man", All Rentals, Coca Cola, and Honeyville Grain. Walt was an avid sports fan. He was passionate about the St. Louis Cardinals and Chicago Bears. He loved to attend baseball games with family and friends. Walt was a Born-Again Christian and attended Northeast Christian Church in IL and Washington Heights Church in South Ogden, UT where he drove the church bus, ushered and greeted visitors and members alike. After giving his life to Christ, he frequently reminded others that "God's got my back!" and his life verse was Phil. 4:13 which states, "I can do all things through Christ who strengthen me," He was survived by his daughter Michelle Alfaro, grandsons Gonzalo, Marcos and Michaelango, and a granddaughter Alyssea. Also surviving him were his siblings Rita (Don) Smith of Hazel Green, AL; Michael Cunningham of Rockford, IL; Scott (Sharon) Cunningham of Kansas City, MO; Wanda (Mark) Flessner of Roscoe, IL; and Steve Cunningham of Rockford, IL. He was preceded in death by his parents and two sisters Terry and Sherrie Cunningham. A memorial Service and dinner was held at Washington Heights Church on Monday, April 10, 2018 where he was honored and remembered by family and friends. There will also be another memorial in IL at a future date.

Walter James Cunningham, Jr. died on Thursday, April 5, 2018 at the George E. Wahlen Veteran's home. He suffered for the past seven years with leukemia, and recently with a brain tumor. Walt was born on July 24, 1956 in Rockford, IL to Walter... View Obituary & Service Information

The family of Walter James Cunningham created this Life Tributes page to make it easy to share your memories.