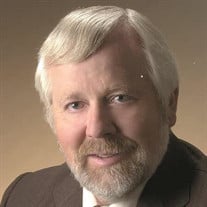 Walter Melvin Meacham 1942 - 2019 Walter Melvin Meacham, 76, passed away in the early morning hours of Friday, August 9, 2019, in his home in Kaysville, Utah, surrounded by his loved ones. We have lost a Sweetheart, a Father, a Pa, and an all-around Giant of a man. He will be greatly missed. Walt was born in Rock Springs, Wyoming on October 24, 1942, to Clarence Rogers and May Geneive Putnam Meacham. At roughly the same time as his birth, his father shot a six-point bull elk while hunting in the Upper Holback. He kept a tooth from that elk in his boyhood box of treasures, and his love of hunting and fishing grew from that day forward. He was the fifth child in a family of seven children. Melba, Colleen, Russell, and Laura called him Little Brother. While Mary and Martha called him Big Brother. His family moved from Rock Springs, Wyoming to Gering, Nebraska when he was a baby. They found a small farm to rent with no plumbing or running water, but only lasted two years before their crops were devastated by hail storms. They then moved to Utah, where his father got a job at the naval base in Clearfield. They resided in a large government housing project called Verdeland Park in Layton, Utah, located where Layton Commons Park and Layton High School now stand. Walt spent the next thirteen years of this life in Verdeland Park which he remembers as a magical place full of friends and adventures. He attended Verdeland Park Elementary, Central Davis Jr. High, and graduated from Davis High School. During his time at Davis, he played football, he wrestled, and was the president of the Davis High A’Capella Choir his senior year. He sang bass in a trio along with Ray Gardiner, and Terry Ward. They would often perform at the Oakridge Country Club and receive a hamburger dinner and $5 each as payment. In 1959 his family moved into a brand-new home located on Crestwood Road in Kaysville, Utah. He met his Sweetheart, Mary Elizabeth Timothy, and then married her in Casper, Wyoming on June 1, 1961. They were later sealed in the Salt Lake Temple. Together they raised five children; Tamy (Dave) Bremer, Troy Meacham, Rody (Andy) Meacham, Haly Meacham, and Giny (Chris) Tisdale. They have twelve grandchildren; KayCee Meacham, Erik Bremer, Cazdyn (Madie) Meacham, Wade Meacham, Hayden Meacham, Maddie Meacham, James Richards, Hanah Richards, Izaac Tisdale, Maegan Tisdale (deceased), Maari Tisdale and Noelle Tisdale. Walt was always a hard worker. He got a paper route when he was in elementary school that paid him $10 a month. He had his father sign with him so he could purchase a $50 red Schwinn bicycle. After paying off the bicycle he moved on to mowing lawns. He learned the mechanics of bike and auto repair from his father and brother and could fix almost anything. He worked for Sperry Utah in Clearfield, Utah on the MinuteMan Missile Project. He started working for Kaysville City Corporation in 1964 for the Public Works department. And then moved on to the Electrical Department as a ground apprentice and trained to become a journeyman electrical lineman. Walt advanced into management and was made Superintendent of Kaysville Power in 1976 until his retirement in 2001. He served on the Board of Directors for several power associations and utility corporations including UAMPS (1980-2001), IPA (1999-2012), and IPSC (2007-2012). He also served on the Kaysville Volunteer Fire Department and was made Captain of the B Company in 1970. He taught his children the art of hard work by moving water pipe and hauling hay, side by side, for Cliff Linford. Walt did this to feed his horses and cattle that he raised for beef to feed his family. Walt, on many occasions, would come home from his day job and go to work on other projects. For six years he would come home weekdays and work most weekends on the remodel of his and his Sweetheart’s home. Walt was a dyed in the wool Davis High Sports fan. He found the ultimate vantage point for watching the home football games in 1978 when he volunteered to run the chains on the sidelines, which he faithfully did for twenty years. He became interested in Mountain Man culture when Jerry Nielsen started working for Kaysville City. The comradery between them lead to black powder shoots and rendezvous, growing gourds to make canteens, and casting lead bullets. His attention to detail and fine craftsmanship aided him in building several black powder rifle master pieces. He was a member of The Church of Jesus Christ of Latter-Day Saints. He served in many positions including Sunday School Teacher, Webelos Scout leader, and as a Ward Clerk in two bishoprics. Walt is survived by his wife, children, grandchildren, brother Russell (Phyllis) Meacham, sisters Melba Ortiz, Laura Izaat, Martha Parker, Mary Taylor, and brother in law Don Grant and many nieces and nephews. He was preceded in death by his parents, his sister Colleen Grant, and granddaughter Maegan Tisdale. Funeral services will be held 11:00 am, Friday, August 16, 2019, at the Kaysville Central Stake Center, 555 North Fairfield Road. Friends may visit family Thursday, from 6 to 8 p.m. at the Rock Chapel, 25 South 200 East, Kaysville and Friday from 9:45 to 10:45 a.m. at the Stake Center. Interment at the Kaysville City Cemetery. In lieu of flowers, the family suggests donations be made to the Michael J. Fox Foundation to help find the cure for Parkinson’s Disease.

Walter Melvin Meacham 1942 - 2019 Walter Melvin Meacham, 76, passed away in the early morning hours of Friday, August 9, 2019, in his home in Kaysville, Utah, surrounded by his loved ones. We have lost a Sweetheart, a Father, a Pa, and an... View Obituary & Service Information

The family of Walter Melvin Meacham created this Life Tributes page to make it easy to share your memories.