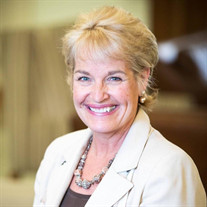 Wendy C. Tidwell-Archibald 1958-2019 Wendy Carla Tidwell Archibald died on Sunday, December 29, 2019, in Provo, Utah from complications associated with stage 4 melanoma. She was born in Nampa, Idaho on October 4, 1958 to Carl and Myrna Tidwell and grew up working on the family’s dairy farm. As a child, she came across a stray dog and was shocked when told the dog had no home. She declared that all strays could come home with her. From that time, anyone who felt marginalized or excluded would always be welcome in her home. This small-town girl went to Washington D.C. with her senior drill team and thinking she would never see anything like it again, chanted, “Remember—you have to remember it all!.” Little did she know, her world would continue to expand as she earned a bachelor's and JD degrees from Brigham Young University, worked on Capitol Hill, was Vice President of a tour company, worked as a guardian ad litem, consulted with top business professionals, married, and raised two daughters. As a testament to their love, Lyle and Wendy met while she was studying for the Bar. On their first date, Lyle had an inkling he had finally found the woman he would marry while Wendy was grateful to have a new “boy toy.” True to form, Lyle patiently kept taking her out and providing study breaks. As the weeks rolled on Wendy finally said, “I love you, but don’t take that too seriously. I love a lot of people.” She often found a way to wring humor out of any circumstance. The first thing she uttered after 40+ hours of labor with her first child was, “How’s my hair?” She became the Dean of Students and Internal Relations at BYU Law School in 2008. In this capacity, she shaped the lives of hundreds of students as a guiding light, life-long mentor, and stabilizing influence. She responded to their needs Monday--Friday, weekends, on every holiday, and even in the wee hours. She embodied her words, “As we interact with each other in all aspects of our lives, both in those that we share in common and in those that set us apart, may we ‘above all things, clothe ourselves in the bond of Charity.’” She is survived by her husband Lyle, her daughters MacKenzie and Madison, and her son-in-law Jake. She leaves her mother, five brothers, and one sister: Myrna, Neils, David, Russell, Shawn, Scott, and Shelly. A memorial service will be held Saturday, January 4 at 12 noon, proceeded by visitations on Friday, January 3, from 7-9 p.m. and Saturday, 9:30 to 11:45 a.m. in the LDS Stake Center, 4560 North Canyon Road, Provo, Utah. Interment will be held at East Lawn Memorial Gardens 4800 N Eastlawn Drive (650 East) Provo, UT.

The family of Wendy C. Tidwell Archibald created this Life Tributes page to make it easy to share your memories.