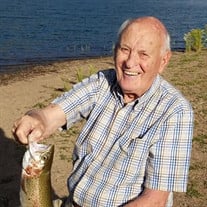 Wiley Dallin Gardner, 85, passed away on June 23, 2018 in South Jordan, Utah. He was born in Venice, Utah on May 8, 1933 to Louis William and Clorene Davis Gardner. He graduated from Richfield High School and was elected State FFA president. He served a 2 ½ year LDS mission in New Zealand and was a graduate of Brigham Young University where he served as freshman class president. Dallin married Beverly Ann Hall on September 4, 1952 in the Manti Temple. During their 32-year marriage they had six children and lived coast to coast in Illinois, Delaware, and California, where Dallin had a successful career as a plant manager for manufacturing companies. He moved his family to Cedar City, Utah in 1971 where he purchased the UNEVA livestock auction with his father. He founded GO (Gardner Operations) Realty and developed offices from Salina to St. George. On December 6, 1986 Dallin married Judy Spencer. They enjoyed many years working closely together in the real estate business. They later joyfully became full-time parents again when they adopted three of her grandchildren: Judie and Katelyn at ages 6 and 18 months, and then two years later, a newborn son, Ty. Dallin is survived by his sister, Bonnie (Frank) Roberts; and his children: Lori (Brad) Squires, David Louis (Kathy) Gardner, Michelle (Daryl) Jones, Annette (Mark) Myers, Matthew Douglas Gardner, Aurora Spencer Sharp, Amanda Gardner Hutchinson, Judie Gardner, Katelyn (Ryan) Beatty, and Ty Dallin Gardner; his granddaughter, Natalia Hutchinson, and 17 other grandchildren. He was preceded in death by his infant daughter, Carolee; his parents; his sister, Winifred (Robert) Fowler; his brother, Hart (Jane) Gardner, and his wife, Judy Spencer Gardner. Burial, and a graveside service for the family, will be in the Richfield, Utah cemetery. An online obituary and guestbook can be found at www.premierfuneral.com.

Wiley Dallin Gardner, 85, passed away on June 23, 2018 in South Jordan, Utah. He was born in Venice, Utah on May 8, 1933 to Louis William and Clorene Davis Gardner. He graduated from Richfield High School and was elected State FFA president.... View Obituary & Service Information

The family of Wiley Dallin Gardner created this Life Tributes page to make it easy to share your memories.